Olga Kuzkova can been seen performing a Nazi solute in photos uploaded to the popular Russian social media platform VKontakte. 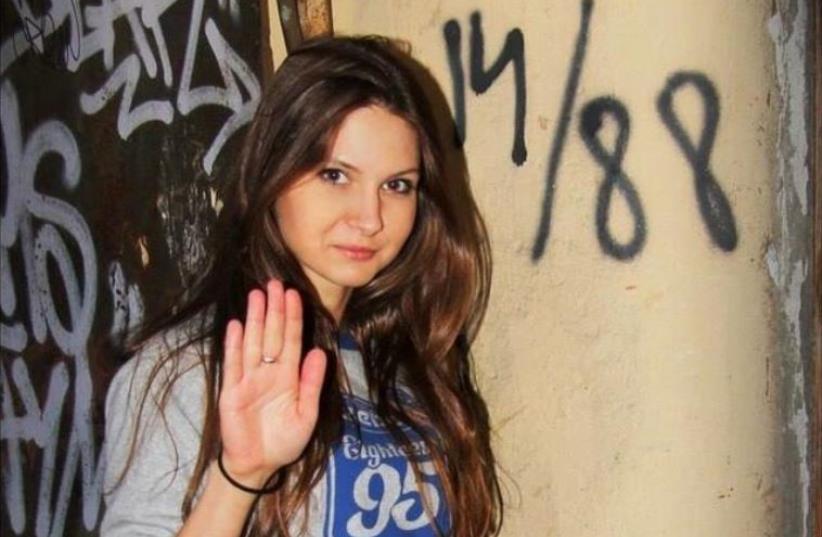 Olga Kuzkova was photographed posing in front of graffiti reading “14/88,” a coded message among white supremacists
(photo credit: VKONTAKTE‏)
Advertisement
The official beauty queen of Russian soccer has been stripped of her title following revelations that she adheres to a neo-Nazi ideology.The political views of Olga Kuzkova, who was recently chosen by the Russian Football Premier League as its 2015 Miss Charming, were discovered after she posted a series of anti-Semitic images on the popular social media platform VKontakte.In one widely circulated image, Kuzkova can be seen performing a Hitler salute while standing in front of a wall covered in Nazi graffiti.Other images, translated by The Moscow Times, called for the burning of Jews and promoted racial purity.“The Nordic spirit cannot live in the body of an untermensch,” one post declared, using the German word for subhuman. Kuzkova was promptly fired, with league director Sergei Cheban telling Sport Express that the sporting body does “not tolerate manifestations of fascism, nationalism and racism,” the Times reported.Racism in Russian football has long been acknowledged to be a problem. An official from FIFA (the sport’s international governing body) recently told the BBC that he saw it as a “big challenge.”Fans of Torpedo Moscow landed their team in hot water three months ago when they unfurled a banner containing Germanic runes popular among neo-Nazi groups at a match, prompting condemnation from the Russian Football Union.Responding to Kuzkova’s ouster, Rabbi Boruch Gorin of the Federation of Jewish Communities of Russia stated that he was not surprised by her attitudes. The rabbi stated that while affiliation with national socialist groups was not central to Russian culture, it was still popular among young people from certain social circles.Neo-Nazism is a “hobby” for teenagers who eventually grow out of it, he explained.“I can’t say it scares us. These groups are marginal and small and much less Judeophobic than xenophobic in general.”Another beauty pageant in Russia last year sparked Jewish outrage after neo-Nazis called for women to submit selfies online in order to be considered for the “Miss Hitler 2014” contest.Participants were requested to submit Nazi-themed “selfies” to the competition organized by a neo-Nazi group on VKontakte – Russia’s largest social networking service. The group also asked that they submit a caption describing why they “love and revere the Third Reich of Adolf Hitler,” the UK’s Daily Mail reported.While anti-Semitic violence in Russia is very low – especially by Western European standards – the country has come under fire for its use of anti-Semitism and the Holocaust in propaganda aimed at discrediting the Ukrainian government.According to anti-Semitism researcher Irena Cantorovich of Tel Aviv University’s Kantor Center, both sides in the Ukrainian conflict have used such tactics, triggering “a phenomenon of ‘provocative anti-Semitism’ – anti-Semitic incidents aiming to discredit the other side.”While Russia does take steps to combat anti-Semitism, growing government control of the media has not slowed the use of anti-Semitic motifs or the use of “anti-Semitic propaganda,” she wrote in a report earlier this year.“In 2014, the channels of the state broadcasting company VGTRK, the NTV channel and state channels in English such as Russia Today, became the main disseminators of anti-Semitic and anti-Israeli rhetoric. A very popular subject was the alleged Jewish nationality of those who oppose the current regime.”There was widespread outrage in the Western press earlier this year when far-right extremists from across Europe congregated in St. Petersburg for a conference. Those gathered included groups accused of neo-Nazism and anti-Semitism.