The attackers kicked and punched the teen after carving a swastika and the number 88 into his arm with a razor blade. 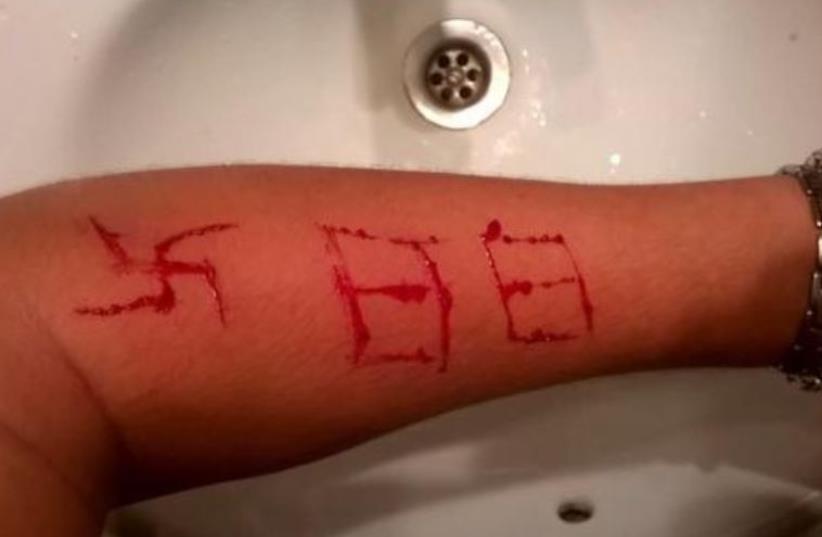 Neo-Nazis in Bilbao , Spain carved a swastika and 88 into this teen's arm with a razor blade
(photo credit: TWITTER)
Advertisement
A northern Spanish community is in shock after members of a neo-Nazi gang attacked a teen and carved Nazi symbols into his arm with a razor blade. According to Spanish news site Público, which first reported the incident, the attack happened in the city of Bilbao during the early-morning hours of August 29. Two of the assailants grabbed the teen as he was entering the doorway of his home. A third attacker carved a swastika and the number 88, another Nazi symbol, into his left arm. Afterward, the attackers viciously beat up the teen, kicking and punching him. One of his eyes was injured in the attack and his entire body was bruised.Local police are currently conducting an investigation into the attack. The identity of the teen has been withheld and it is not being revealed whether he was Jewish or whether there were any motives to provoke such an attack.


The Duesto district, where Bilbao is located, has seen an uptick in neo-Nazi activity, which up until this point, mainly consisted of hanging banners around the city with hate slogans. Some of the banners that the city had to taken down alluded to affiliation with the Ultra-Right group Golden Dawn in GreeceIn July, a left-wing activist was attacked at night by a group of neo-Nazis. The group has also been vandalizing buildings in the area, such as a youth center in Duesto with swastikas and the number 88.