Netanyahu depicted as Hitler in Argentina posters ahead of key visit

One of the posters shows Netanyahu in an SS uniform with the words: “Get out Zionists from Palestine. Get out Netanyahu."

By TOVAH LAZAROFF
SEPTEMBER 11, 2017 11:27
A poster depicting Benjamin Netanyahu as Hitler
(photo credit: WORLD ZIONIST ORGANIZATION)
Advertisement
Pro-Palestinian protesters in Buenos Aries hung posters of Prime Minister Benjamin Netanyahu dressed in a Nazi uniform prior to the Israeli leader’s arrival in Argentina on Monday.One of the posters shows Netanyahu in an SS uniform looking like Adolf Hitler that said: “Get out Zionists from Palestine. Get out Netanyahu,” according to the World Zionist Organization, which sent copies of the posters to the media.Another poster in the form of a wanted sign charged Netanyahu with “human rights crimes” and the “genocide of the Palestinian people.” 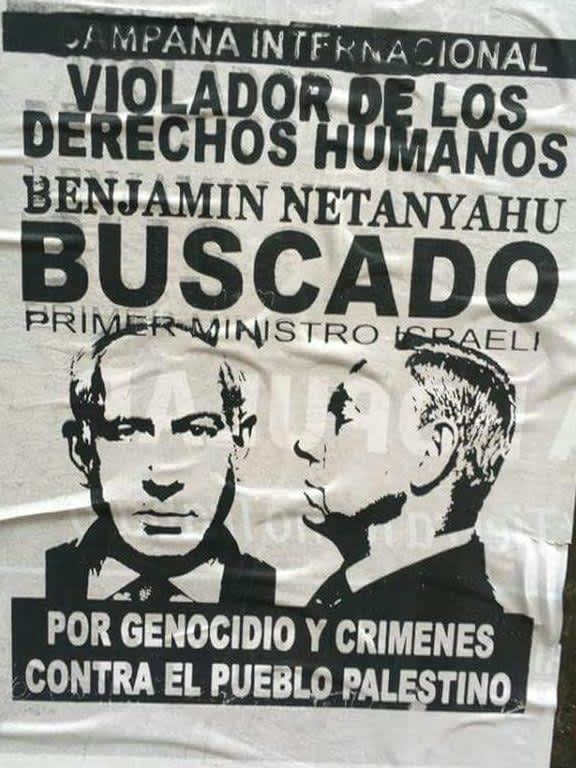 A poster depicting Benjamin Netanyahu as a wanted war criminal (World Zionist Organization)
A Facebook page called Justice, Peace and Freedom for Palestine, featured a picture of Netanyahu with a Swastika drawn on his forehead.An anti-Netanyahu rally is planned for Tuesday afternoon in front of the Israeli Embassy in Buenos Aries. Netanyahu left Sunday evening for Argentina, Colombia and Mexico, the first sitting Israeli prime minister to visit Latin America.World Zionist Organization deputy chairman and dead of Countering Global Anti-Semitism Yaakov Haguel reacted to the antisemitic nature of the attacks against Netanyahu.“It is a very serious matter to hang signs promoting antisemitism and hatred against Israel on such an historic day,” Haguel said. “The WZO will continue to fight this scourge.” Argentina has the sixth-largest Jewish population in the world and the largest in Latin America, numbering some 200,000.