This is not his first visit to Israel this year, nor his first meeting this year with Netanyahu. 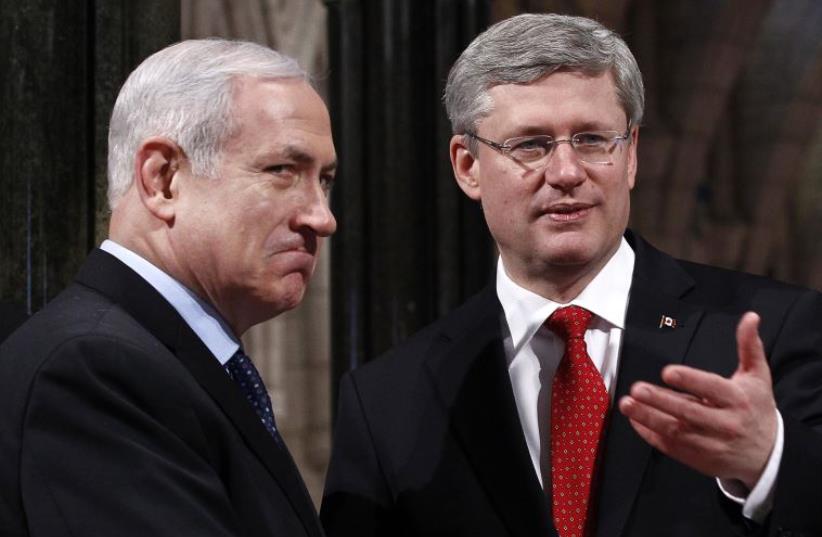 Canada's Prime Minister Stephen Harper (R) shakes hands with Prime Minister Benjamin Netanyahu in Ottawa
(photo credit: REUTERS)
Advertisement
RELATING TO the project that will link Harper’s name in perpetuity with the State of Israel, Netanyahu said that Israel is a hub on many levels, including bird migration from Europe to Africa and back. He saw the center as an important facility for ornithological research, combining beauty and science.In a reference to the many friendships that Israel has developed over the years with the leaders of different countries, Netanyahu said that, “the best friendship is based on an alliance of values. Stephen has stood up for these values time and again.”Harper, acknowledging that he is not supposed to be partisan in another country, recalled that he had first come across Netanyahu in the 1980s and had seen him on television when he had “virtually exploded off the screen.” He had predicted at the time that Netanyahu would one day become prime minister of Israel.Not only did that happen, he said, but Netanyahu had become Israel’s longest serving prime minister and had transformed the country and its image on the world stage.Harper described Netanyahu as “the most consequential figure in the history of the State of Israel.”Familiar for several years with the work of the JNF, Harper noted that it was “a unique organization” which had been building up the country long before the establishment of the state, and had in fact been founded while the country was still under the rule of the Ottoman Empire.Harper declined to take sole credit for his friendship with the Jewish people of Canada and the State of Israel. “The support I gave was not only mine, but of every member of my caucus.” All were dedicated to protecting and defending Israel at every level, he said.Today’s Israel was built from virtually nothing to become one of the most successful countries in the world, he noted. Harking back to Israel’s raison d’etre, aside from its Biblical heritage, Harper said that it was to provide safety for Jews against the scourge of antisemitism. He regretted that such hatred is again pervading the world.As for the bird sanctuary in the Hula Valley, “it will enable me to be associated with the State of Israel forever,” he said.Earlier in the evening, Atar had made it clear that the project was a curtain raiser for the 120th anniversary of the JNF, which was founded in 1901, with the original intention of purchasing land in what was then Palestine. The organization has since initiated and been involved in countless development projects all over the country. Its particular focus toward 2040 is the development of the Negev and the Galilee.Many of the donors to the Bird Sanctuary came specially from Canada to participate in Harper events, and gave both him and Netanyahu enthusiastic standing ovations and cheers.Netanyahu may be having a tough time in retaining his foothold in Israeli politics, but as far as the Jewish Diaspora is concerned, he’s still Israel’s number one politician.