In addition to the prime minister, the group met with an array of politicians from all sides of the political map. 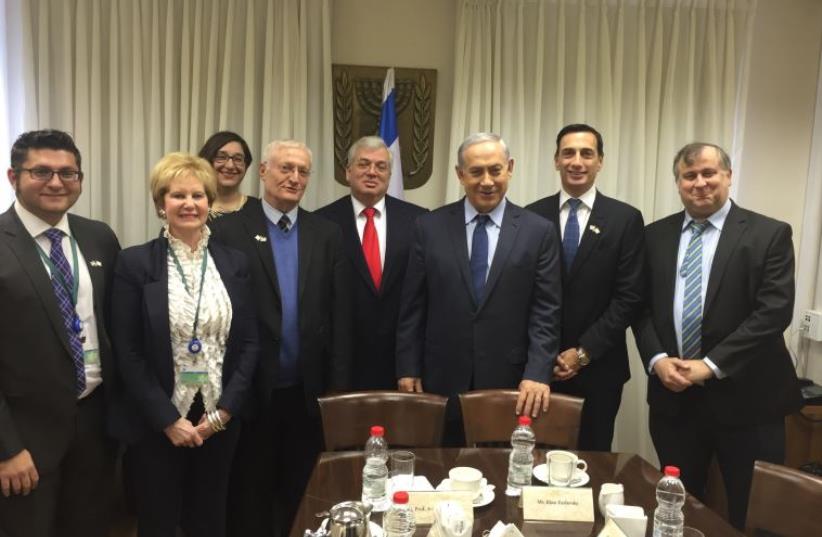 Prime Minister Benjamin Netanyahu meets with Limmud FSU leadership
(photo credit: Courtesy)
Advertisement
To mark the tenth anniversary of Limmud FSU (former Soviet Union), Prime Minister Benjamin Netanyahu met in his office Thursday morning with Limmud FSU's senior leadership. The prime minister heard an account of Limmud activities and congratulated the educational organization on its work and said that the task of bringing young Russian speaking Jews closer to Judaism and the State of Israel was holy work and should be continued.In addition to the prime minister, the group met with an array of politicians from all sides of the political map including Education Minister Naftali Bennett; Knesset Speaker Yuli Edelstein; Jewish Agency for Israel Chairman Natan Sharansky; Immigrant Absorption Minister Ze'ev Elkin; Director-General of the Zionist Union, Hilik Bar and Roy Folkman, chair of the Kulanu Knesset faction.‪The volunteer-run program is active all over the world where there are Russian speaking Jewish communities – not only in Russia, Ukraine, Moldova and Belarus but also in the United States, Canada, Australia – and Israel.
‪
The festival kicks off at 5.30 p.m. on Thursday December 17 at Kibbutz Ginosar, and at 9.00 p.m. moves to Kvutzat Kinneret for a special musical performance devoted to singer and songwriter Naomi Shemer, presented by the Beit Zvi School of the Performing Arts, and attended by members of her family.
‪
On Friday December 18, a key event of the festival will be live video interviews with opposition leader Isaac Herzog; MK Avigdor Liberman; Transportation Israel Katz and MK Ksenia Svetlova.
‪
Among the dozens of other lectures, workshops, roundtable discussions, debates, tours and cultural presentations, will be a lecture by Maj. Gen. (res.) Uzi  Dayan, previous head of the National Security Council and now head of the National Lottery, on Israel’s security situation; a round table with the participation of Rabbi David Stav, head of the Tzohar rabbinical organization and MK Yoel Razvozov, on religion and the state; a lecture by MK Michael Oren, previously Israeli ambassador to the US, on Israel in the eyes of the media; Brig. Gen. (res.) Avi Benayahu, former IDF spokesman, on the new security situation in the Middle East; and an interview with MK Dani Atar, newly-elected head of the Jewish National  Fund.