In a bizarre twist, the woman was later beaten to death by their disabled son. 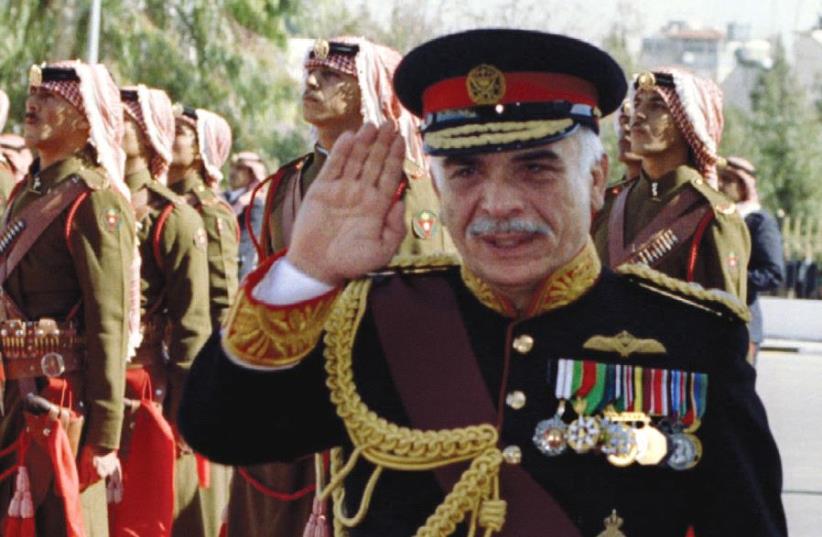 Jordan's King Hussein reviews Beduin guards of honor in 1992
(photo credit: REUTERS)
Advertisement
NEW YORK, NEW YORK - Recently declassified CIA documents show that King Hussein of Jordan had a child out of wedlock with an American Jewish actress, who was later beaten to death by their son. A three-page CIA memo, made public for the first time last month, shows that the spy agency was eager to make a good impression on the Arab monarch during an official state visit in 1959, according to USA Today. The file reveals that the 24-year-old king, having divorced his first wife two years earlier,  “was especially desirous of female companionship during his Los Angeles visit and it was requested that appropriate arrangements be made through a controlled source of the Office in order to assure a satisfied visit.”As Hussein sought to secure financial aid from the Dwight D. Eisenhower administration during the trip, the spy agency arranged a meet with a 32-year-old B-list movie actress named Susan Cabot. The memo shows that the clandestine security service went through a ‘prominent’ LA attorney employed by eccentric Hollywood movie producer and aeronautics pioneer Howard Hughes, who invited Cabot to a party thrown by billionaire oilman Edwin Pauley.  But before attending the tycoon’s festive affair, Cabot (born Harriet Shapiro) was told by her handler “We want you to go to bed with him.”“The actress said that she rejected the proposal but finally went to [Hussein’s] party,” the memo states. She later ‘became quite taken with the foreign official and found him to be most charming.” A few days later the king asked the CIA to arrange another meeting with Cabot, this time in New York City. 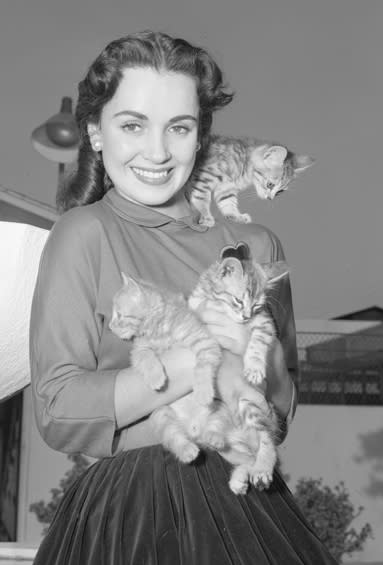 Susan Cabot, born Harriet Shapiro, photographed in 1950. (PUBLIC DOMAIN / LOS ANGELES DAILY NEWS - UCLA LIBRARY)
As the memo notes, the two struggled to keep rumors of their budding relationship at bay, with the Muslim monarch concerned his romance with a Jewish actress could cause political turmoil in his home country. ‘[Cabot] speculated about the possible sources of certain personal information that she felt had been leaked to the press and implored the CIA to help put an end to the tabloid gossip, according to the declassified document.   It remains unclear how long Cabot and the King maintained their relationship. But in 1961, she gave birth to a boy named Timothy, long-rumored to be Hussein’s son.Born a dwarf, Timothy was later adopted by Cabot’s second husband, Michael Roman. According to The Los Angeles Times, Cabot’s son eventually grew to 5’4” following “thrice-weekly injections of a hormone derived from the pituitary glands of cadavers. A former attorney once called him a ‘failed human experiment.’”In 1986, Cabot was found bludgeoned to death with a weightlifting bar in her San Fernando Valley home, leading to her son’s arrest. Timothy was later charged with involuntary manslaughter, claiming his mother who suffered from mental illness that attacked him first. He blamed his aggressive response to the incident on use of illegal narcotics. During Timothy’s trial, it was revealed in court that Cabot had received a monthly payment of $1,500 from the Jordanian government.An attorney in the trial wrote in court filings: “For better or worse, it looks like child support.” Timothy Roman was sentenced to four years in prison and a minimum sentence of probation, dying of heart failure in 2003. King Hussein married three more times, his last to American Lisa Halaby, who became Queen Noor. He led Jordan until his death from Non-Hodgkin lymphoma in 1999 at the age of 63.