"I have the honor to be a role model for young women and girls," said the female scribe. 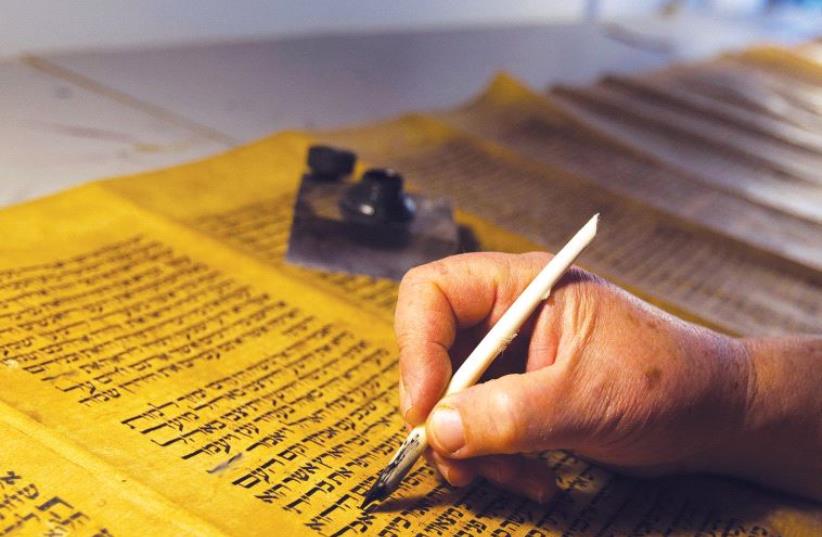 A torah scroll
(photo credit: REUTERS)
Advertisement
NEW YORK - The independent synagogue Tamid, located in downtown Manhattan, has unveiled its new Torah, entirely written by a female scribe, this week as celebrations for the High Holidays begun. The Torah, the first one ever written by a woman for a Manhattan synagogue, was unveiled the morning of Rosh Hashana at St.Paul’s Chapel, the oldest house of worship in New York City and where the congregation resides.
The scribe, Philadelphia native Julie Seltzer spent two and a half years writing the 304,805 letters scroll. She was chosen for her work as an educator, artist and community builder.“Being a female scribe is something very new in the Jewish tradition,” she said in a video posted on Tamid’s website about the new Torah. “It has been traditionally forbidden for a woman to write a Torah. If she did write a Torah, it would not be accepted as Kosher.”“I have the honor to be a role model for girls and young women,” Seltzer added. “I really love the idea of being part of the link in that chain of history.” Tamid practices what they call “positive Judaism,” which focuses on ways Judaism can help one enhance their personal well-being. "We have an expanded view of tradition and Jewish law,” the founding Rabbi, Darren Levine said. “While we respect the ancient ways, we live in a different era and our tradition needs to evolve to stay relevant to the values we hold dear today; equality among men and women is just one of these modern values.”Over 450 people involved with Tamid have also left their mark on the new Torah as well, by writing letters in the scroll with Seltzer’s guidance. "The truth is that we did not commission Julie to write our scroll because she is a woman,” member of Tamid's Leadership Council Alla Liberman said. “We commissioned Julie because she best reflects our vision for positive Jewish life in the 21st Century.”
Advertisement
Subscribe for our daily newsletter