Margret Sullivan addressed the issue Friday in her column a day after the graphic titled "Lawmakers against the Iran deal" was posted online and published in the newspaper. 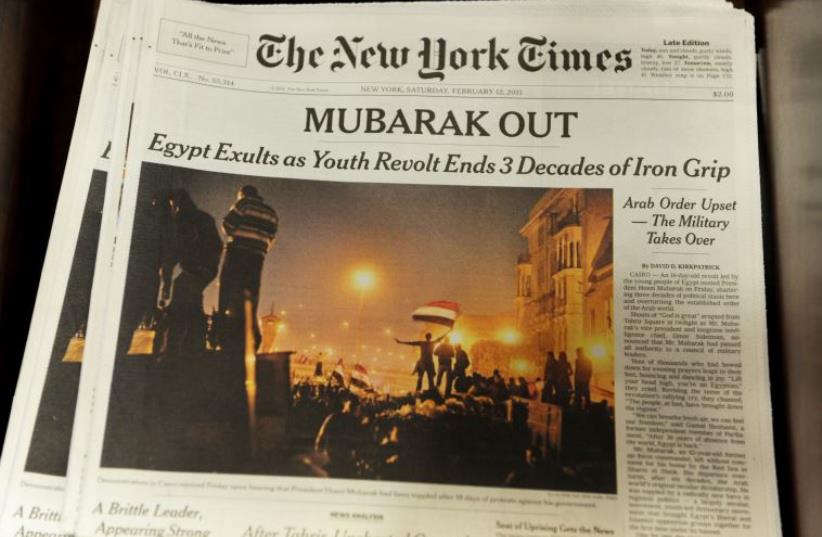 The New York Times
(photo credit: AFP PHOTO)
Advertisement
The New York Times’ public editor called a graphic about the Iran nuclear deal that singled out Jewish lawmakers “insensitive and inappropriate.”Margret Sullivan addressed the issue Friday in her column a day after the graphic titled “Lawmakers against the Iran deal” was posted online and published in the newspaper.The chart originally included a column with the heading “Jewish?” “Yeses” were highlighted in yellow, while “noes” were not.Another column showed the estimated Jewish populations in the lawmakers’ districts. Districts with a ratio above the United States average of 2.2 percent Jewish also were colored yellow.The “Jewish” column was removed by Thursday evening with no comment. On Friday afternoon, an editor’s explanatory note was published on the newspaper’s website.“A chart published on Thursday about Democrats in Congress who opposed the nuclear agreement with Iran oversimplified a complex aspect of the debate - the views of Jewish members of Congress and the divisions among American Jews over the deal,” the note said.The chart was the subject of articles in other publications, including in Politico and Slate, as well as JTA. It also received a great deal of attention on social media.“Under Times standards, the religion or ethnicity of someone in the news can be noted if that fact is relevant and the relevance is clear to readers,”  an editor’s note penned by Times editors and released on Friday read. “The positions of Jewish members of Congress, and efforts to influence them one way or another, were a legitimate subject for reporting, since many Jewish Americans on both sides of the debate were particularly concerned about the deal’s impact on Israel’s security. Some members of Congress alluded to their perspective as Jews when they announced their positions on the deal,” the note continued. “But the chart did not include this context, or make clear that Jewish voters and lawmakers, like other Americans, were sharply divided on the issue. Its emphasis may have left the impression that their Jewish identity was a decisive factor for Democrats who opposed the deal, an assumption that was not supported by reporting,” the note read.