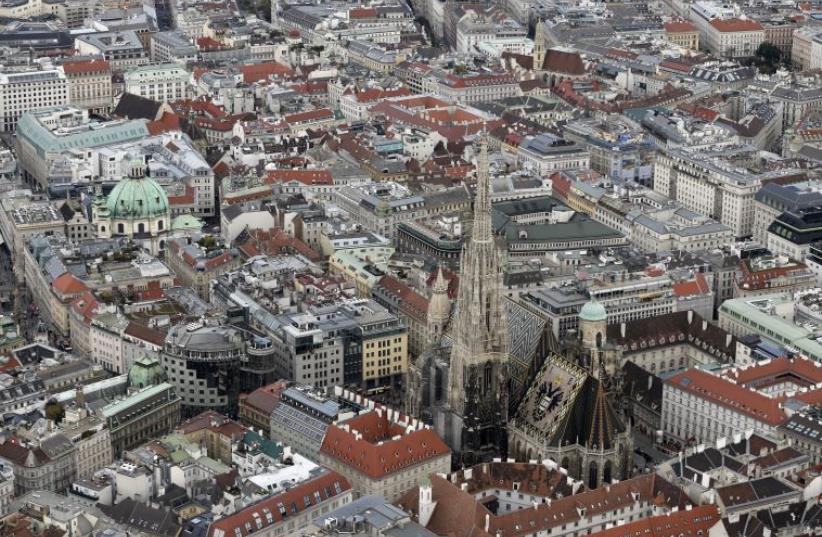 Vienna, Austria
(photo credit: REUTERS)
Advertisement
VIENNA  - A record number of antisemitic incidents, ranging from verbal and online threats to assaults, were recorded in Austria last year, a non-governmental organization said in a report published on Thursday.The number of cases rose slightly in 2016 to 477 from 465 the previous year, when the figure had jumped by roughly 200, the organization, the Forum Against Antisemitism said.The report follows a finding by Austria's BVT domestic intelligence service a year ago that incidents involving xenophobia, Islamophobia and anti-Semitism were on the rise in the small country that was swept up in Europe's migration crisis and where the refugee influx has become a hot-button issue."It is of course alarming," said the president of the Jewish Community of Vienna (IKG), Oskar Deutsch."We now have two consecutive years at a record level," said Deutsch, who put the size of Austria's Jewish community at roughly 13,000-15,000 in an overall population of 8.8 million.Growing concerns about jobs and security, often in connection with immigration, have helped fuel growing support for the far-right Freedom Party, which was founded by former Nazis. It is now running first in opinion polls.The Freedom Party is strongly critical of Islam and denounces anti-Semitism, but its efforts to court Jewish voters have shown few signs of success. The IKG, the main body representing Austrian Jews, says it is still xenophobic.The report said that cases involving insults and threats had increased by a third to 24 last year, while those involving the internet fell by a quarter to 153. Those involving letters and phone calls rose 7 percent to 198, and those involving damage to property rose 36 percent to 68.There were seven assaults, up from two in 2015 but below the nine recorded in 2014.Increased awareness and reporting was one of several factors that explained the eight-fold increase in incidents recorded since 2006, but there was also a weakening stigma associated with anti-Semitic views, the group that compiled the report said."What we see is that racism in general has become more socially acceptable in Austria," Amber Weinber of the Forum Against Antisemitism said, adding the same was true of antisemitism."Since it has become more socially acceptable, people increasingly are posting (anti-Semitic messages) in their own name or sending letters with return addresses on them," she said.The causes of that shift were, however, hard to pin down, Weinber added. "We do not have an exact explanation. We can only say what we see," she said.