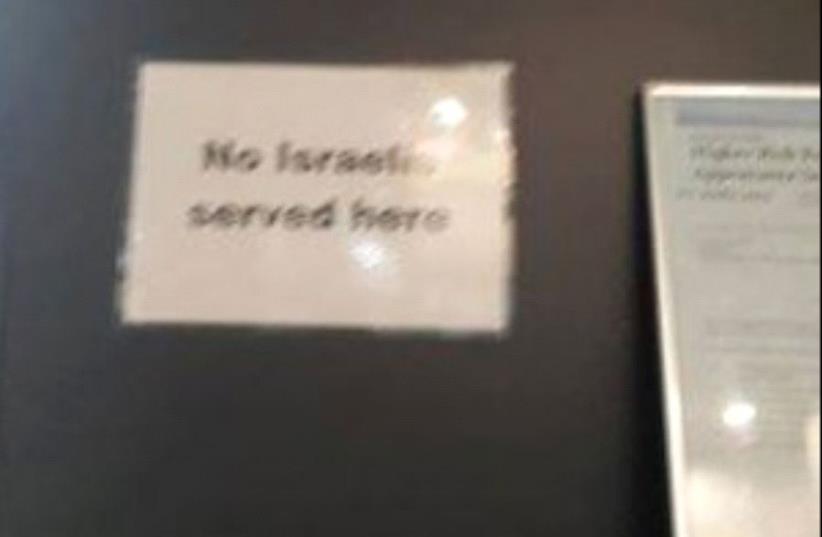 A sign saying “No Israelis served here” at Cold Steel Piercing in Cairns, North Queensland
(photo credit: FACEBOOK SCREENSHOT)
Advertisement
SYDNEY — A body piercing shop in the Australian North Queensland city of Cairns displayed a sign saying “No Israelis served here.”Israeli tourist Mohr Wenger posted a photo of the sign Saturday on Facebook. Wenger wrote in the post that she and a friend with whom she was traveling around Australia entered Cold Steel Piercing Friday to have their noses pierced only to be told by the owner that he would not serve them because they were from Israel.“At that moment that guy said he can’t pierce our nose because he doesn’t serve Israelis out of principal [sic]. He said he doesn’t agree with what our government does and there for we are not welcomed in his shop,” she wrote. “He even pointed out a sign that we missed saying ‘No Israelis served here.'”“A sign that means ‘I don’t want to listen, I don’t care who you are but if you are from Israel go away.’ That’s sugarcoating anti-Semitism. That’s sugarcoating racism,” she added.Wenger also wrote: “I remember learning about such things in history class but I never thought I would be in such a situation myself. Not alone at the other end of the world in the land of ‘no worries.’ By the way, when we left the shop he told us ‘no worries.’ Well I didn’t, before I met you.”Fairfax Media reported that Cold Steel Piercing in Cairns did not respond to interview requests. Since the Facebook post on Saturday, more than 100 negative reviews of the business have appeared online, including one calling for people to boycott the shop. Cairns-based Rabbi Ari Ruben told JTA: “Mohr is one of the Israelis that came to our Seder. A couple of Israelis here saw the sign and want to go tomorrow to confront him … and we’ll see if it’s still there tomorrow.”