“If you really want to build peace, then boycotts are the last thing that you need, because you are just pushing the two peoples apart.” 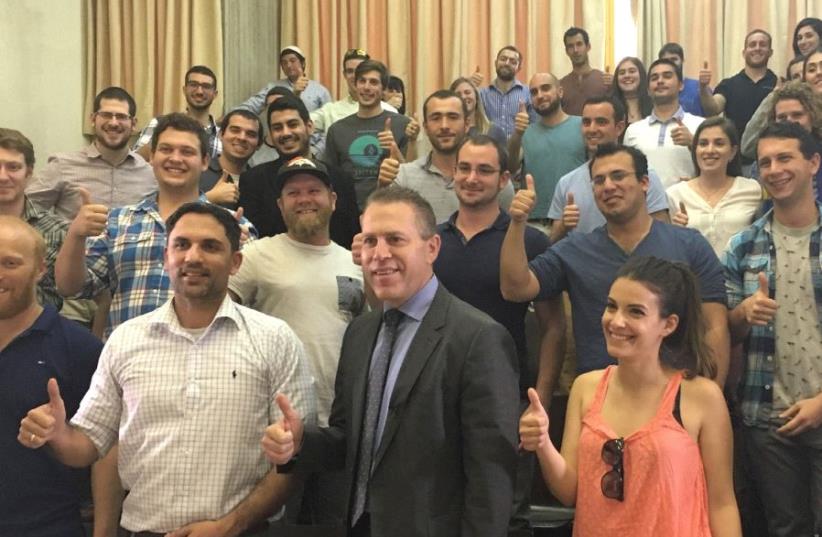 A GROUP of IDF reservists pose yesterday with Public Security and Strategic Affairs Minister Gilad Erdan (center) at a two-day seminar teaching how to combat BDS.
(photo credit: LIDAR GRAVÉ-LAZI)
Advertisement
Public Security and Strategic Affairs Minister Gilad Erdan spoke on Tuesday to a group of US and Canadian IDF veterans participating in a two-day training seminar organized by Reservists on Duty, an anti-BDS group.The initiative, code named “Project Gideon,” was launched in collaboration with the Lone Soldier Center and aims to enlist American IDF reservists to implement the principles and tactics employed by Reservists on Duty in their fight against BDS on university and college campuses across North America.“When it comes to Hasbara, all options for final agreements are on the table for Israel,” Erdan said. “But without direct negotiations [with the Palestinians], no agreement can be reached.“If you really want to build peace, then boycotts are the last thing that you need, because you are just pushing the two peoples apart.”Erdan told the reservists, who will be flying to the US at the end of March to visit 10 campuses, that BDS groups have attempted to “seize and monopolize the discussion on human rights and use it as a weapon to delegitimize Israel.”“Today we also have social media and smartphones, which are being used to disseminate lies and incite terrorism,” he said. “This is a campaign operating in a lot of arenas and using new technologies. The intention is to incite the next generation of Western countries on international campuses – a future threat that can turn into a strategic threat.”Erdan said the government has finally realized, albeit a bit late, the importance of investing resources in the fight against delegitimization.He said the best way to combat the BDS network was to create a “cohesive network of our own” to combat the phenomenon.“We need to talk about incitement and the industry of lies on the other side and the Palestinian Authority,” he said. “We and you don’t have anything to be ashamed of; we have to present what is happening in the Palestinian leadership, such as the financing of terrorism and incitement.”Erdan praised the initiative and told the participants they were in a unique position to make an impact since they understand both the language and the culture and can share their personal experiences as IDF soldiers with their peers.“Peace can be built through connections between people and putting an end to the culture of hate,” he said.“At the same time we must expose the hypocrisy of the BDS groups and their real goal, which is to delegitimize and eradicate the State of Israel.”The participants in the program were chosen following a selective screening process and had to meet basic requirements, including having US or Canadian citizenship; having completed IDF service as a lone soldier; mother-tongue English, with a basic understanding of Hebrew; and the ability to fly to the US.“Our mission is to help and provide any assistance we can to all the organizations who are working on a daily basis to combat BDS,” Reservists on Duty chairman and founder Amit Deri told The Jerusalem Post on Tuesday.The program is unique because it allows for Americans to share their experiences as reservists in the IDF and in Israel with their friends, families and communities in the US, he said.“Every participant is being sent to an area surrounding where they grew up – they know their home, they know how to speak the same language as their friends,” Deri said.Yair and Maor Rudick, two siblings participating in the program, told the Post they are looking forward to the chance to speak to their friends and communities about Israel.After coming to Israel on a gap year program and enlisting in the IDF, both siblings decided to participate in the project, albeit for different reasons.“A lot of my friends back home have said that they didn’t feel very comfortable on campus – some were scared to go out, afraid to wear kippot,” Yair said. “I feel it is our duty to go and help them out, regardless of who is right or not, you should never feel uncomfortable on campus because of your beliefs.”Maor said she decided to join the program as part of a natural continuation of her Israel advocacy work.“Since high school I have been involved in Israel advocacy programs, and for me it is important to take it further,” she said. “It doesn’t just end after the army, and I don’t think this ever ends.”The siblings said they were looking to reach out not only to friends but also to “people who we don’t normally reach.”“We’re here to stand up for something we believe in,” Yair said. “I want Jews on campus to feel safe and feel that they are able to be prideful of their religion and beliefs, and I also want to expand people’s horizons and explain to them that the situation isn’t as simple as people make it out to be.”