“There are plenty of people who support BDS who have advanced degrees and who call themselves progressives. I look forward to challenging them, because it’s ahistorical." 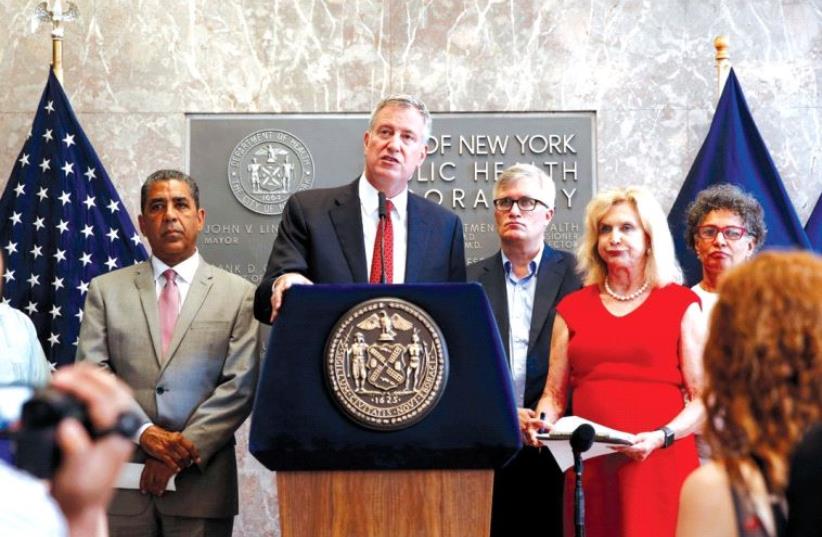 Bill de Blasio speaking at a news conference
(photo credit: LUCAS JACKSON / REUTERS)
Advertisement
NEW YORK – New York City Mayor Bill de Blasio rejected the Boycott, Divestment and Sanctions movement as one which seeks to undermine Israel’s existence, during an event at the Hampton Synagogue in Westhampton Beach, New York.“There are plenty of people who support BDS who have advanced degrees and who call themselves progressives,” he said to congregants on Saturday. “I look forward to challenging them, because it’s historical.”“We, in the United States, or in any nation, you can disagree with a particular government’s policy at that moment in time, but that doesn’t mean that you don’t believe in that nation or its right to exist or its founding ideals,” he added.The Anti-Defamation League issued a statement applauding De Blasio’s remarks on Tuesday.ADL New York Regional Director Evan R. Bernstein said the mayor’s disapproval of BDS casts another shadow on the movement’s agenda.“The BDS movement and its campaigns, particularly across college campuses, have really put a damper on moderate and civil discourse on the Israeli-Palestinian conflict,” he said.“Mayor De Blasio’s remarks are also particularly important not just because of his prominent stature, but also because he is a proud progressive, and support for BDS has unfortunately been popular amongst progressive groups,” Bernstein added.The New York mayor has been vocal in his support for Israel and against anti-Semitism. He has traveled to Israel several times over the course of his term, including to participate in the International Conference of Mayors.In June, New York Governor Andrew Cuomo signed an executive order banning state companies from collaborating with entities that promote BDS.Last week, New Jersey Governor Chris Christie also signed a law that prohibits the state’s public worker pension fund from investing in companies that engage in the boycott of Israel and support BDS.More than a dozen US states have already adopted similar legislation this year.