Much media attention has focused on the issue since The Jerusalem Post exposed the existence of the marker honoring a Nazi collaborator. 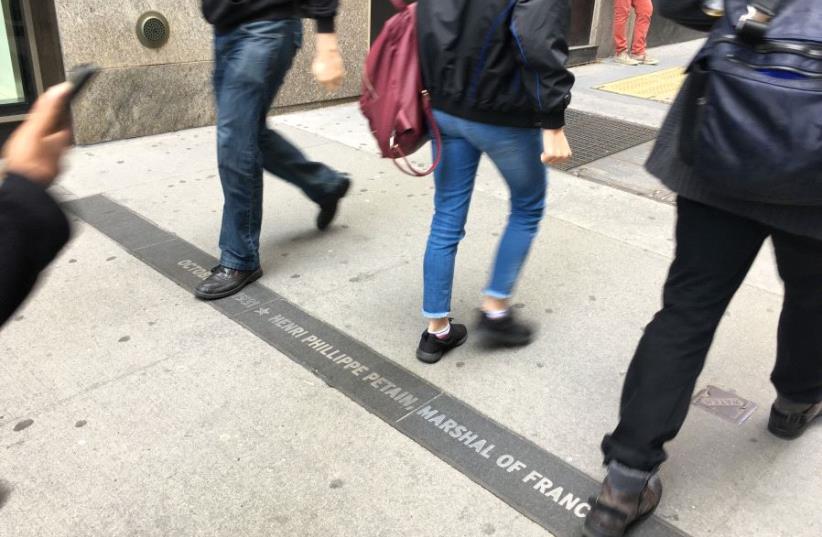 The name of French Nazi collaborator Henri Philippe Pétain is engraved in New York City's "Canyon of Heroes" on Broadway, alongside those of historical figures such as Churchill, De Gaulle and Ben Gurion
(photo credit: DANIELLE ZIRI)
Advertisement
NEW YORK – New York City’s mayor said he would seek to remove the plaque honoring Nazi collaborator and marshal of France Philippe Pétain, whose existence in downtown Manhattan was exposed by The Jerusalem Post in a story published in May.The plaque, installed in 2004, is embedded on a sidewalk as part of New York’s “Canyon of Heroes” on Broadway, having been placed there to commemorate Pétain’s 1931 ticker-tape parade in the city, which he earned for defending his country during the WWI. But Petain went on in 1940 to head France’s Vichy government, which collaborated with Nazi Germany and was responsible for deporting more than 10,000 Jews to concentration camps under Hitler’s regime.Pétain also implemented his own discriminatory measures against the Jews, including property confiscation and exclusions from certain professions.At the end of the war, he was tried for treason and sentenced to death, but his sentence was commuted to life in prison, where he died in 1951.“After the violent events in Charlottesville, New York City will conduct a 90-day review of all symbols of hate on city property,” Mayor Bill De Blasio wrote in a tweet on Wednesday evening. “The commemoration for Nazi collaborator Philippe Pétain in the Canyon of Heroes will be one of the first we remove.”Media attention had already been focused on the plaque since the Post reported on it three months ago.Jewish leaders had called on City Hall to remove it. Among the protesters were Betty Ehrenberg, executive director of the World Jewish Congress’s North America branch, and New York State Assemblyman Dov Hikind, who wrote a letter and met with De Blasio to discuss it.Hikind has applauded the mayor for his plan to seek the plaque’s removal. “New Yorkers have an obligation to say, ‘Not in our city,’” Hikind said.“It’s time to remove all of New York City’s monuments and markers that glorify bigotry and strengthen that which perpetuates these ignorant beliefs,” he wrote in a statement.