The city stressed it does not admit to engaging in any improper practices, but explained that the initiative represents “an effort to provide more detailed guidance" to police. 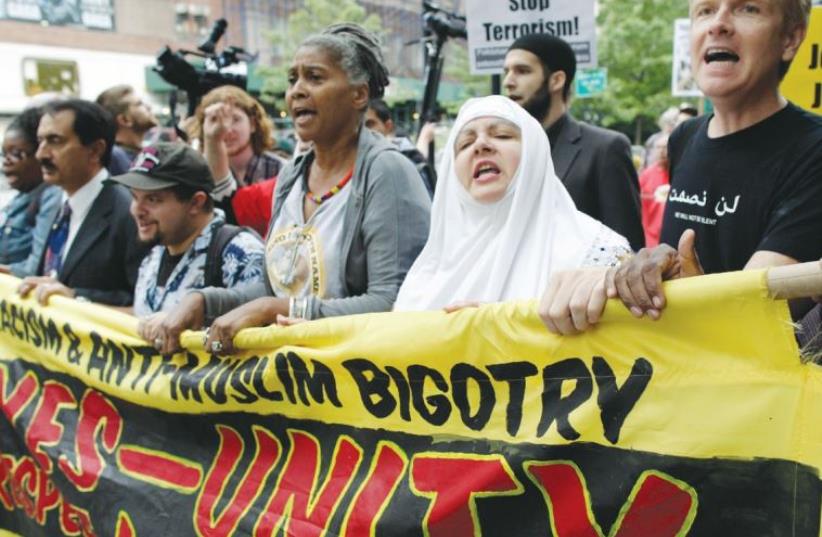 Protesters march in the Rally Against War, Racism and Islamophobia held on September 11, 2011, on the 10th anniversary of the 9/11 attack on the World Trade Center
(photo credit: REUTERS)
Advertisement
NEW YORK – City authorities announced that they will provide “additional guidance” to police officers as part of a settlement of lawsuits accusing the New York Police Department of improperly investigating Muslim groups in the decade following the September 11, 2001, terrorist attacks.While the city stressed on Thursday that it does not admit to engaging in any improper practices, it explained that the initiative represents “an effort to provide more detailed guidance to NYPD personnel” within the existing Handschu Guidelines, a set of rules governing investigations of terrorism and other potentially unlawful political activity implemented after a class action suit in 1971.The guidelines were modified after 9/11 to give authorities more freedom in conducting terrorism-related investigations, but will now be partially restored as part of the resolution of two cases brought against the city in 2013: a lawsuit alleging “suspicion-less surveillance” of Muslims and a motion alleging Handschu Guidelines violations brought by class counsel in the Handschu litigation.According to the city, “several longstanding NYPD practices and policies will be added to the Handschu guidelines – namely, that the NYPD does not pursue investigations where race, religion, or ethnicity is the substantial or motivating factor.”The guidelines were developed as a result of a 1971 case against Barbara Handschu and others that was dismissed due to illegal entrapment measures by the NYPD.The changes in these guidelines will include: incorporating police policies against religious profiling; adding a provision for considering the impact investigations have on people who are not targets of investigations; establishing reasonable time limits for certain investigations; as well as adding a civilian member to an internal NYPD Handschu Committee.The city stated that the civilian representative must be an independent attorney, pass city and federal government background checks, and be legally bound by a confidentiality order.NYPD Commissioner William Bratton explained that the initiative is “the latest step in the continuing efforts to build and maintain trust within the city’s Muslim community and with all New Yorkers.”According to him, incorporating existing NYPD practices into the Handschu Guidelines makes it easier to maintain best practices in intelligence gathering and investigations.“The modifications also bring the guidelines closer in line with FBI practices, which is helpful in working collaboratively with our federal partners,” Bratton said.He added that the addition of a civilian member to the Handschu Committee is a key part of the settlement and will “increase trust in the Handschu process.”“We are committed to strengthening the relationship between our administration and communities of faith so that residents of every background feel respected and protected,” Mayor Bill de Blasio said. “New York City’s Muslim residents are strong partners in the fight against terrorism, and this settlement represents another important step toward building our relationship with the Muslim community.”“Our city’s counterterrorism forces are the best in the world, and the NYPD will continue working tirelessly to keep our city safe in the fight against terrorism while respecting our residents’ constitutional rights,” he added.City and NYPD officials also stressed that the proposed settlement does not weaken the NYPD’s ability to fulfill its commitment to investigate and prevent terrorist activity in New York City and that “New Yorkers can be confident that this agreement does nothing to compromise the safety and security of this city.”The settlement still needs to be approved by a federal judge in the coming months.