Karega had made comments accusing Israel and “Rothschild-led bankers” of responsibility for downing a Malaysian airliner over Ukraine in 2014. 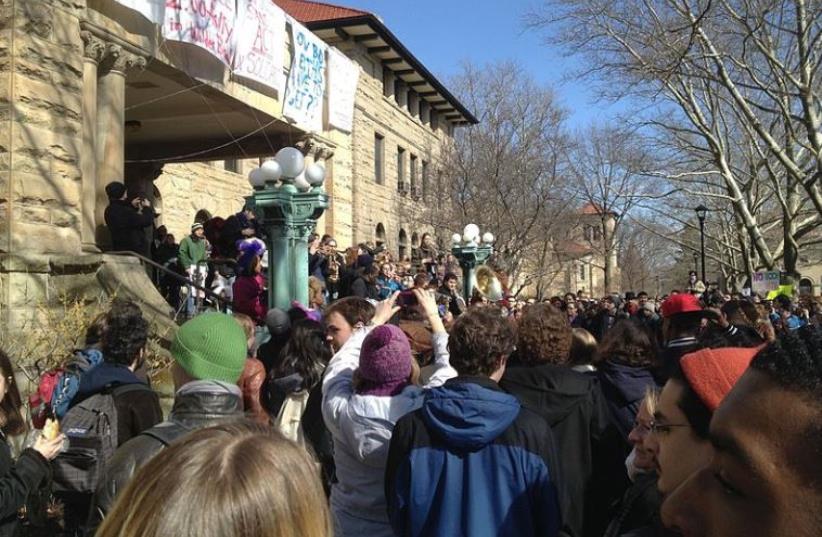 A protest at Oberlin college (archive)
(photo credit: Wikimedia Commons)
Advertisement
An Oberlin College professor who made antisemitic comments in March has been put on paid leave.According to the New York Times on Wednesday, the college's director of media relations, Scott Wargo said Oberlin had been "considering carefully the grave issues surrounding" Professor Joy Karega's "anti-Semitic postings on social media." The school is in the process of evaluating the situation and Wargo noted that "[un]til that process is complete, Dr. Karega has been placed on paid leave and will not teach at Oberlin."Karega had made comments accusing Israel and “Rothschild-led bankers” of responsibility for downing a Malaysian airliner over Ukraine in 2014. She also posted a graphic of Jacob Rothschild, a member of the prominent Jewish banking family, with a caption reading: “We own your news. The media. Your oil. And your government.”Oberlin originally defended Karega in the name of free speech, posting on their alumni Facebook page, "The statements posted on social media by Dr. Joy Karega, assistant professor of rhetoric and composition, are hers alone and do not represent the views of Oberlin College."Oberlin has drawn attention in recent months for what some alumni claim is a culture of tolerance for antisemitism. More than 250 alumni have signed an open letter to college President Marvin Krislov voicing concern about this and mentioning several incidents at the school, including the expulsion of the Kosher Halal co-op from the Oberlin Student Cooperation Association and a protest against Israel on Rosh Hashanah that Jewish students had to pass through on their way to holiday services.The school also garnered headlines in December when African-American student activists issued a 14-page list of demands to Krislov,, including that the school divest from companies doing business with Israel. JTA contributed to this report.