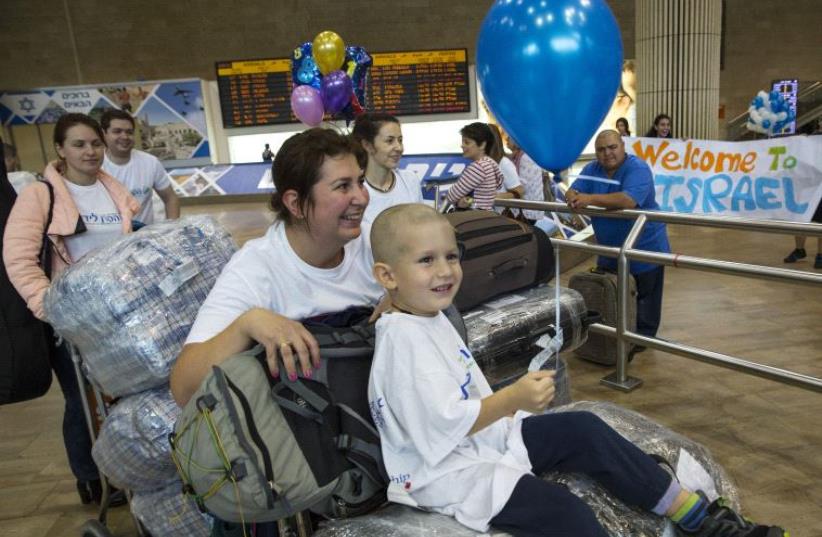 250 Olim from Ukraine are welcomed upon arrival at Ben-Gurion Airport on November 2, 2016
(photo credit: IFCJ)
Advertisement
As some 250 Jewish Ukrainians began their new lives in Israel on Wednesday, others in Kiev were celebrating a new effort to strengthen the Jewish community that remains there.Two aliya flights from Ukraine landed at Ben-Gurion Airport on Tuesday, the same day as the inauguration of a new Jewish community center in Kiev was held. Several of the newest arrivals of a continuous influx from war-torn Ukraine spoke of the difficult conditions from which they fled.“I have never been to Israel before but I am confident that this is the best place for my family and me now,” said Maria Shkred, from Donetsk, a city hit hard by the war in Donbass, which broke out in 2014. “We lived in fear, I was depressed during this time period more than once, and my son developed a stutter as a result of these difficult times. I fell in love with Israel before I set foot in it. I love the country and the endless opportunities it may offer me.”Valentina Garnat, who made aliya with her husband and three children, said it was a miracle her children survived.“Life under a shelter had become a routine during the time we were living in Mariupol,” she said. “There was fighting at one point that forced us to stay in a shelter for over two months.”Olga Iosylevych, another oleh, said: “The day to day situation in Ukraine now is awful and in some mysterious way is only getting worse. Throughout the battles, as time became stressful, my family and I were forced to live on the streets.”The flights were funded by the International Fellowship of Christians and Jews (IFCJ), which since 2012 has been bringing Jews to Israel from various countries around the world. They also provide financial and social support for the olim after they arrive in Israel, to help them integrate into their new country.“As a part of our engagement with aliya we are often come across moving stories of Jews from all around the world that have been through numerous troubles and now at last are fulfilling their Zionist dream and coming to live in Israel,” IFCJ president Rabbi Yechiel Eckstein said.The IFCJ is also invested in supporting Jews still living in Ukraine and other former Soviet Union countries, providing food, medical care, housing and other basic assistance and financing a network of safe children’s homes throughout the area. The organization does collaborative work on the ground with the American Jewish Joint Distribution Committee (JDC), the latter having recently opened the Halom Jewish Community Center (JCC) which was officially dedicated this week.The two-month-old 17,000-squarefoot facility located in central Kiev is the result of efforts by the JDC and Kiev’s Jewish community to provide a multi-generational hub for Jewish cultural, educational, community, social-service programs and activities.“Today’s dedication of the Halom JCC is yet another step forward in the evolution of Jewish life in Kiev, showcasing the revitalization of Jewish culture, state of the art care for the poorest Jews and the tenacity of Ukrainian Jews to forge on in their community building despite the issues their country faces,” JDC president Stan Rabin and CEO Alan H. Gill said in a statement at the inauguration ceremony.“JDC is honored to have once again partnered with the Jews of Kiev to open this new center, a reflection of their empowered and creative Jewish identity,” they added.They were joined by Israeli Ambassador to Ukraine Eli Belotsercovsky and several other members of Israeli, US and German embassies, alongside local Jewish leaders, including the Jewish Federation of North America president Jerry Silverman.Kiev’s Jewish community has access to numerous synagogues, community programs, institutions and schools. Now, its new JDC center has expanded on that. It houses the Jewish Family Service, an organization which gives support to at-risk families and displaced Jews from Ukraine’s east, assisting them in their move to the capital. Other services include early childhood programs, including baby and prenatal yoga, speech therapy, and mental health assistance.Classes offered by the center range from music to Hebrew and English language courses, cooking, arts and crafts, dance and other sports. Teens can also take advantage of the JCC-sponsored Youth Club, leadership-training program, Sunday school, cinema club, vocational assistance program, weekend camping experiences or tours to historic Jewish sites in Kiev.