Thus far, over 100 organizations and communities have signed up at www.KaddishInitiative.com, including the Israeli umbrella organization for Jews from Arab countries. 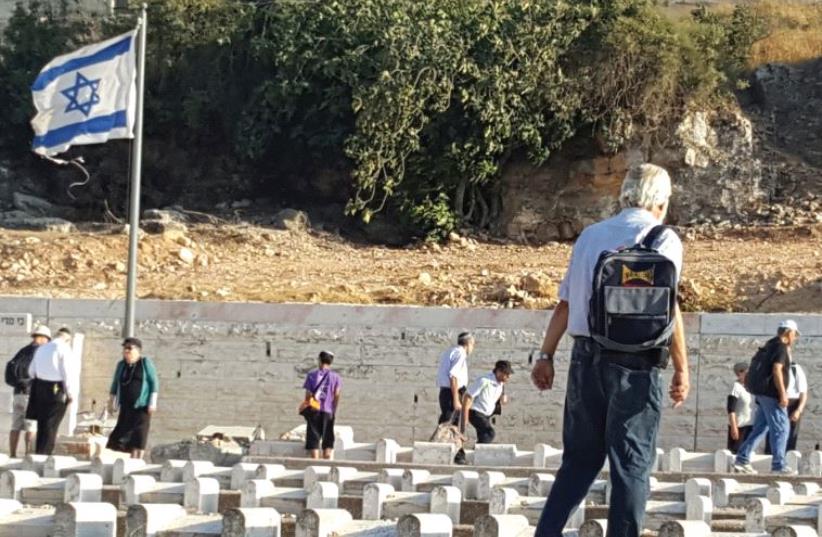 Reciting the Kaddish prayer at the city’s ancient Jewish cemetery
(photo credit: BEN BRESKY)
Advertisement
Diaspora and Israeli organizations and communities representing millions of Jews around the world will participate in a mass Kaddish (the mourners’ prayer) and recite a specially designed Azkara (memorial prayer) this Shabbat for Jews buried in inaccessible Arab countries across the Middle East and North Africa.
The date is the closest Shabbat to November 30, which is the Day to Commemorate the Departure and Expulsion of Jews from Arab Countries and Iran. It is a date officially marked by the State of Israel and Jewish communities around the world.
Thus far, over 100 organizations and communities have signed up at www.KaddishInitiative.com, including the Israeli umbrella organization for Jews from Arab countries, representing millions of people in the Jewish state; Maccabi World Union, the Jewish organization with the largest active membership in the world at over half a million; the European Jewish Congress, the organization representing all Jewish communities in Europe; the American Zionist Movement, representing dozens of Zionist organizations across North America, and dozens of others.
The Diaspora Affairs Minister Omer Yankelevich has joined the call for Jews around the world to recite the prayers.
“A fundamental cornerstone of the Jewish tradition is our collective memory. Therefore, I call on Jewish communities around the world to join in this global Shabbat of Remembrance,” wrote the minister, in a letter of support for the initiative. “By reciting the Mourner’s Kaddish and an Azkara on the Shabbat of November 28, we will stand united in solidarity, in honor of those we cannot physically pay our respects to.”
Over 11,000 rabbis, communal and organizational leaders and others sectors of the Jewish world have downloaded the Azkara prayer from the website "The Kaddish Initiative," including ultra-Orthodox, Hasidic, Modern Orthodox, Conservative and Reform, Ashkenazi, Sephardi and Mizrahi Jews, from every continent.
The Kaddish Initiative began in 2017, when that year’s winner took a selfie with Miss Israel, and in turn, the person who ran the Miss Iraq beauty contest lost their funding and sponsorship. It became apparent that the first Miss Iraq was Renée Dangoor, who was crowned in 1947 in Baghdad, and her son, David Dangoor, is a prominent philanthropist and businessman, living in London.
Sass Peress, a cousin of Dangoor’s, was contacted, asking if in return he could be sent some photos of his grandfather’s grave in a Jewish cemetery in Sadr City, Baghdad. When he realized the state of the cemetery and cemeteries in Jewish communities around the Arab world, which could not be visited by relatives, he formulated the idea of a mass Kaddish for those who could not physically visit their departed loved ones.
“More than a religious event, the recitation of the mass Kaddish and Azkara are an important display of solidarity with the Jews of the Middle East and North Africa – and our history should be acknowledged and never forgotten, to make sure it is never repeated,” said Peress.
This year, David Dangoor became involved and set up a concerted, organized outreach effort to the wider Jewish world to place the annual Kaddish on the global Jewish calendar.
“Unlike the case of other Jewish tragedies, there is no communal showing of religious solidarity for the exodus and expulsion of Jews from Arab countries,” said Dangoor. “It is thus vital that this be a widely recognized initiative, to say these prayers annually in synagogues and Jewish institutions in Israel and around the world. "Even in communities where there are few Jews from the Middle East and North Africa, these prayers and a display of religious solidarity are vital for breaking down the barriers between our different communities,” he said.