"Bless the people of this too often wounded country with the ability to know their own best selves." 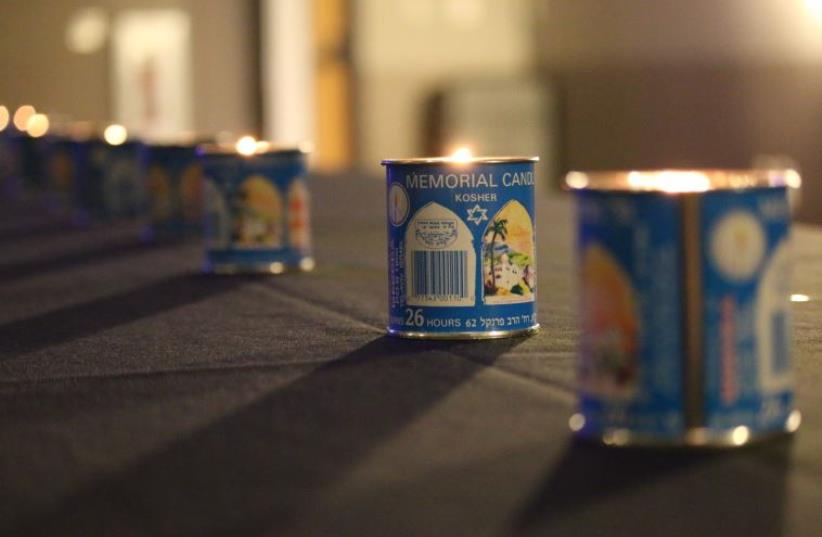 In honor of the Pulse shooting victims, Yizkor candles adorn a table in the Rosen Jewish Community Center in Orlando on Wednesday, June 22.
(photo credit: SHANA MEDEL)
Advertisement
ORLANDO – Rattled by the Pulse massacre, members of the Southwest Orlando Jewish Congregation gathered in solidarity on Wednesday evening to commemorate the 49 victims of the deadliest mass shooting in modern US history. Before it began, children from the community were invited to partake in an art project led by Rabbi Sharon Barr Skolnik. Kindergarten through fifth-grade students decorated rocks with rainbow colors and added their hand prints to a poster that will be placed in downtown Orlando this week. The mother of three said she was inspired to host the art session after learning that no other Orlando community center had specifically held any type of event or vigil for children after the Pulse nightclub shooting. “It became clear that our kids needed some kind of outlet, not to deal with their grief, but to express the love that we have for the people around us,” Rabbi Barr Skolnik said. “It’s our job to put out love in the face of hate … Kids don’t understand why this happened. That’s their biggest question.” Nearly 100 Jewish residents trickled into the Rosen Jewish Community Center in Orlando for the memorial service. It began with a few remarks from her husband, Rabbi Hillel Skolnik of SOJC, who reminded the Orlando audience that “love conquers all” in the face of adversity. The Pulse attack, he said, “was of course an attack on the LGBT community here in Orlando. But it affected so many of us so quickly because of our love for our brothers and sisters within this city. And what it has inspired in all of us here, and hopefully people across the country and people around the globe, is a feeling of ‘Ahavat Achim,’ a love that you feel for your neighbors.” Skolnik asked the crowd to stand, as congregants lit 49 Yizkor candles and read aloud each of the victims’ names. An additional two candles were lit, one to commemorate singer Christina Grimmie, who was shot at an Orlando concert venue almost two weeks ago, and one for the two-year-old toddler who was drowned by an alligator in Orlando last week. Shortly after the reading of the names, an 11-member choir made up of youths and adults took center stage to perform a medley of songs, including “When You Believe” from the animated feature Prince of Egypt, and “For Good” from the award-winning musical Wicked. SOJC president Jeff Sikora also took to the stage to offer some words of comfort and hope. He recited a poem titled, A Pray of Love, Kindness, Peace and Justice. “Righteousness, justice and kindness are not in heaven above, not across the sea, not far away, but very close to us — in our mouths, in our hands and in our hearts,” Sikora said. “Bless the people of this too often wounded country with the ability to know their own best selves. To muster their strength in the world to heal, to transform, to lift up, so that all our precious communities will know unconditional love.” Sikora, the Skolnik family and about 20 other people left the JCC after the vigil and drove to the Dr. Phillips Center for the Performing Arts, a center for the arts in downtown Orlando. Adi Strauss, a 22-year-old Israeli from Alon Hagalil, was also among them. “It’s very overwhelming,” said Strauss, who arrived in Orlando just two weeks ago. “I thought I was coming to the safest place in the world, the happiest place. You just don’t expect anything like this to happen here.” Strauss joined the congregants in relighting all of the 52 candles and placing them on a grassy area at the center, which is currently home to a massive Pulse memorial for the grieving city of Orlando. “This center, a place of great beauty and performance, has also come to be known as a place of memory,” Skolnik said. “But it is also important to not memorialize alone. To know that there is community, family and loved ones around us always brings the comfort that we all need.”