Orlando rabbi: This is an attack against humanity 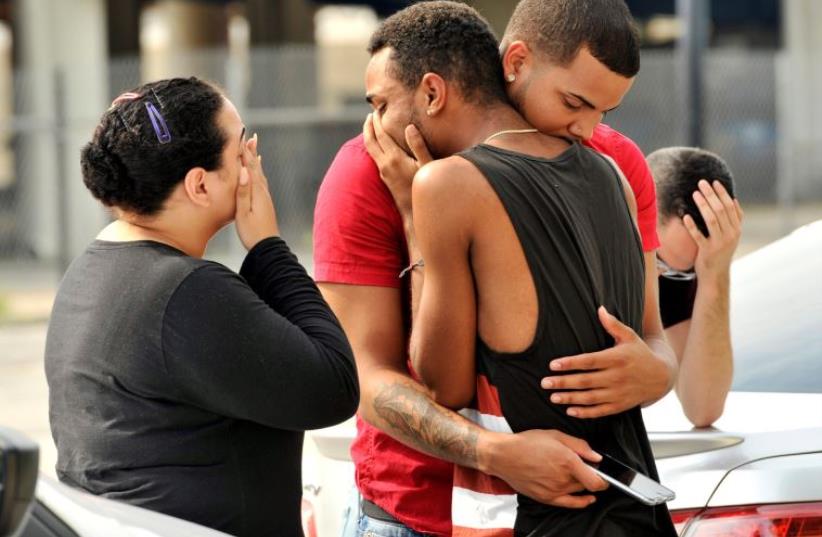 Friends and family members embrace outside the Orlando Police Headquarters during the investigation of a shooting at the Pulse night club, where as many as 20 people have been injured after a gunman opened fire, in Orlando, Florida, US June 12, 2016.
(photo credit: STEVE NESIUS/REUTERS)
Advertisement
Rabbis and Jewish leaders across Florida expressed their horror at the barbaric attack in an Orlando gay nightclub on Sunday morning.Rabbi Hillel Skolnik, head of the Southwest Orlando Jewish Congregation, said the shooting was “an attack against humanity, an attack against the LGBT community, against the US and against LGBT people all over the world.”“It makes people afraid to leave their homes and to live their daily lives, but we must continue on with life and not let the terrorists win,” he told The Jerusalem Post.The South Orlando Jewish Congregation, a Conservative community, opened a special fund-raising campaign to support victims of the shooting and their families.Skolnik said his community would be holding a prayer vigil for the victims and their families later in the week, although the date is yet to be set since police forces are currently stretched thin providing protection to similar events across the area.The rabbi said he had personally talked to one member of his community who worked in a restaurant close by to the nightclub, and who was familiar with several of the victims.“She’s heart broken and in tears for clear reasons,” he said. “I saw her this morning and she was visibly shaken.”Skolnik said he addressed his congregation over the Shavuot holiday regarding the attack and gave a message of respect and fighting intolerance to the community.“We must do our best not to allow the hatred that exists in the world to infiltrate out own lives, to ensure that the values of love, compassion and respect are the values that inform our lives and the way we interact with others, and continue to build the kind of society that we want to live in,” said the rabbi.He added that the capability of Israelis to overcome repeated terrorism and loss was something he and the congregation were drawing on in Orlando in the wake of the attack.Rabbi Tom Heyn of the Temple Israel of Greater Miami – which runs a program serving the LGBT Jewish community in South Florida – described the shooting as “profoundly sad and troubling.”Heyn insisted the cause of the slaying was not the Muslim faith of shooter Omar Mateen but the easy availability of assault rifles as well as Mateen’s psychological problems.“He is one of thousands of people who externalize their fear and anger through violence,” said Heyn. “It is important for us that civic leaders take steps to reduce gun violence, while we as a community are trying to promote the progressive values that we stand for as a Reform community, equality, inclusion, service to the community and interfaith cooperation.”Members of Temple Israel participated in the mass vigil staged in Miami Beach on Sunday night in honor of the victims, while the community’s annual “Pride Seder” scheduled for this Wednesday – which highlights the experiences of LGBT people – will take on even greater meaning, he said.“We now have a heightened sense of responsibility to advance the cause of equality and to overcome the extremist views at the root of this problem: homophobia, bigotry and racism. These are the problems and they exist in all religions and all communities and this is what we must root out.”Anti-Defamation League CEO Jonathan A. Greenblatt said the “heinous” attack is “yet another reminder of the serious threat posed by the Islamic State terrorist group.”He described the Orlando shooting as a “barbaric act of terrorism in a week that has seen brutal bombings across Iraq, an attack on a café in Tel Aviv, and now this tragedy.”“We must continue to fight this threat against democracy and pluralism with all of the tools available, and by exposing those who perpetrate hateful ideologies of violence and extremism,” Greenblatt said.The ADL also expressed concern that the attack could lead to a backlash against American Muslims.“Whether citizens like the individual suspected of committing this act or war-torn refugees seeking safety, we must remember that we do not define people by their faith,” Greenblatt stressed. “We urge all Americans to not fight hatred with hatred, but rather to come together around our common values of decency and respect.”David Harris, CEO of the American Jewish Committee, said AJC is “simply speechless in the face of such an act of pure evil and hatred.”“This is a time for national solidarity and mourning,” he added. “Violence and hate crimes must be totally and categorically rejected.”Raising the endless debate on gun control, he also asked: “How can weapons be so easily found and used to such tragic ends in our beloved country?” The group New Yorkers Against Gun Violence stressed Sunday that “any shooting, whether it is deemed a mass shooting or not, is an act of terrorism to the person being shot, to their friends and family, and to their communities.”They added that the weapon used in the Orlando attack, an AR-15 assault rifle with a high capacity ammunition magazine, is an arm designed by the military for the military, “yet they have been used time after time to slaughter Americans in our schools, houses of worship, movie theaters, malls and night clubs.”