Trump told reporters in Hanoi that he believes Kim was not aware that Warmbier was in bad shape. 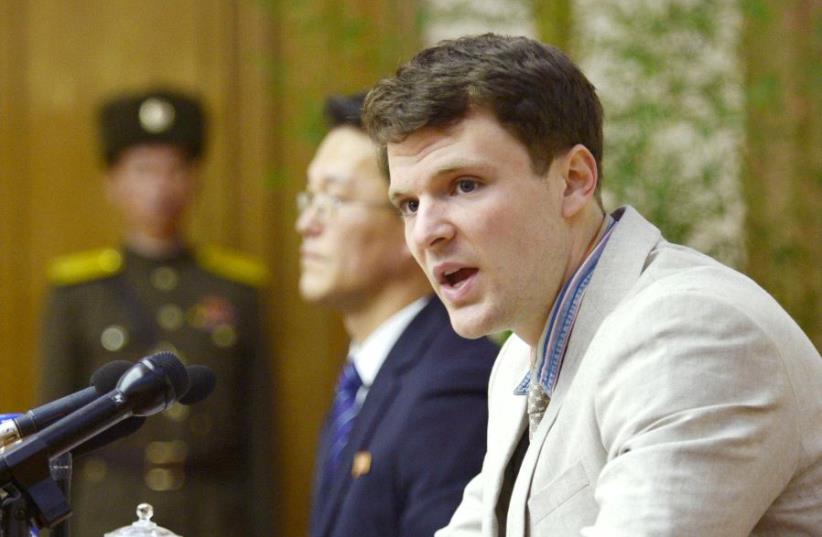 FILE PHOTO - Otto Frederick Warmbier attends a news conference in Pyongyang, North Korea, in this photo released by Kyodo February 29, 2016.
(photo credit: KYODO/VIA REUTERS)
Advertisement
(JTA) — The parents of Otto Warmbier, the U.S. college student who was imprisoned in North Korea and died shortly after his release, criticized President Donald Trump for what they called his “lavish praise” for the country’s dictator.Kim Jong Un “and his evil regime are responsible for the death of our son Otto,” as well as “unimaginable cruelty and inhumanity,” Fred and Cindy Warmbier wrote in a statement Thursday. “No excuses or lavish praise can change that.”Trump met Kim in Hanoi, Vietnam, for talks on the lifting of sanctions from North Korea in exchange for its disarmament from nuclear weapons. The president quit the talks prematurely with no agreements.Trump told reporters in Hanoi that he believes Kim was not aware that Warmbier was in bad shape.“Some really bad things happened to Otto — some really, really bad things,” Trump said, “but [Kim] tells me that he didn’t know about it, and I will take him at his word.”He called the dictator “my friend Kim” while urging him to see Vietnam as an example of the economic growth that North Korea could achieve if it abandons nuclear arms.Warmbier was detained in North Korea for over a year and died shortly after his return home to Cincinnati, Ohio, in June 2017 in a coma. He was 22.The University of Virginia student had been sentenced to 15 years of hard labor for allegedly stealing a propaganda poster. His doctors in the U.S. said he suffered extensive brain damage.