On Friday, police named Kraft as a client at the Orchids of Asia Day Spa in Jupiter, saying they had video of him engaging in paid sex acts with a worker there on two occasions. 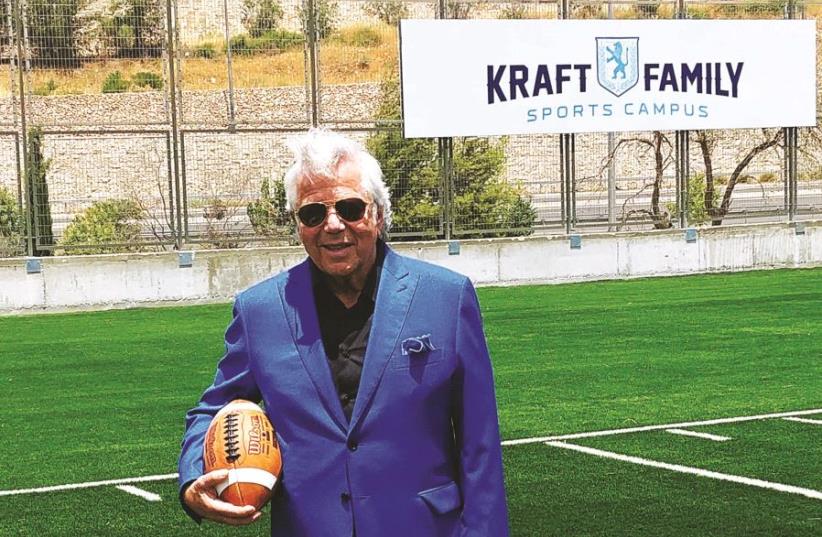 Robert Kraft poses on the 30-yard-line of the regulation-size football field at the newly inaugurated Kraft Family Sports Campus in Jerusalem. The New England Patriots owner wrapped up his star-studded Touchdown Israel II trip yesterday.
(photo credit: URIEL STURM)
Advertisement
Feb 25 - Florida prosecutors on Monday filed formal charges against Robert Kraft, the billionaire owner of the New England Patriots football team, and about two dozen other men for soliciting prostitution at massage parlors, authorities said on Monday.
The investigation by law enforcement officers in three Florida counties into the trafficking of young women to work at day spas and massage parlors has led to hundreds being charged.
Kraft, 77, and the other defendants charged with first-degree misdemeanors "come from all walks of life," Dave Aronberg, the state attorney for Palm Beach County, told reporters.
On Friday, police named Kraft as a client at the Orchids of Asia Day Spa in Jupiter, saying they had video of him engaging in paid sex acts with a worker there on two occasions.
Florida law requires that defendants convicted of those crimes pay a $5,000 fine, perform 100 hours of community service and take classes on the dangers of prostitution and human trafficking, Aronberg said. While they also face possible jail time of 60 days to one year, it is not likely to be applied to first-time offenders, he said.
Kraft denies engaging in "any illegal activity," according to Aaron Salkin, a spokesman for Kraft and the Super Bowl champion Patriots, the National Football League's dominant franchise.
Kraft and the other defendants were charged as part of a statewide probe into human trafficking, which Aronberg said was still underway.
"The larger picture which we must all confront is the cold reality that many prostitutes in cases like this are themselves victims," he said.
The NFL, which said last week it was monitoring the case, released a new statement on Monday saying everyone, including team owners, were bound by the league's personal conduct policy.
"We are seeking a full understanding of the facts, while ensuring that we do not interfere with an ongoing law enforcement investigation," the statement said. "We will take appropriate action as warranted based on the facts."