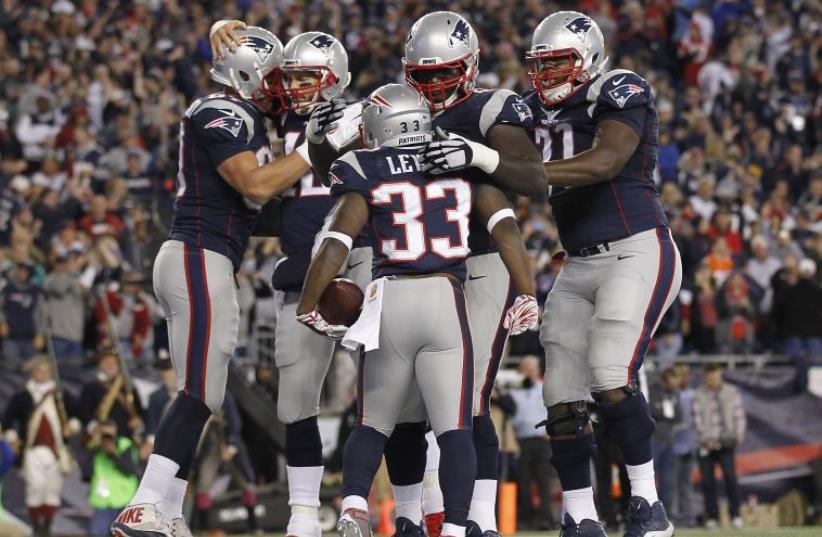 Foxborough, MA, USA; New England Patriots celebrate a touchdown
(photo credit: REUTERS)
Advertisement
Robert Kraft, the Jewish businessman and New England Patriots owner agreed Monday to honor Ezra Schwartz, the American teenager who was killed in a terror attack at the Gush Eztion junction in the West Bank last week, with a moment of silence during the Patriots’ match against the Buffalo Bills late Monday night.The move was set to expose 80,000 game-goers and millions of Americans on live television to Schwartz’s story, and would be the first acknowledgment on such a grand-scale of the fact that an American citizen was killed in the recent wave of terror that has struck Israel.Kraft’s decision to honor Schwartz was a reaction to a correspondence with former Yesh Atid MK Dov Lipman, who urged the American businessman to bring awareness to the story in whichever way he sees fit.“It would mean so much to the people of Israel, to supporters around the world, and to Ezra’s family and friends if the Patriots could do something in his memory,” Lipman wrote in an e-mail to Kraft.Schwartz was an avid football fan who was passionate about the Patriots.“The one theme which comes out over and over again was his passion for the Patriots,” Lipman wrote. He mentioned that at Sunday night’s funeral, a Patriots jersey, alongside an Israeli flag, was placed besides Ezra’s body.Ezra’s father Avi, while eulogizing his son on Sunday, said that the boy would keep up with the sport and his chosen team even while in Israel. “Football kept us connected,” he said. “We loved it together. We all have such fond memories of the togetherness of watching sports.”Lipman hoped to bring awareness to Ezra’s story, in part, due to the lack of media coverage on the circumstances of his death. “Many in Israel and around the world have been shocked that almost no media outlets covered the murder of this boy who came to Israel for a year of study and volunteering and was shot by a Palestinian terrorist while on his way to his volunteer activity,” he wrote.On Monday afternoon, Lipman received confirmation that Kraft would honor his request.