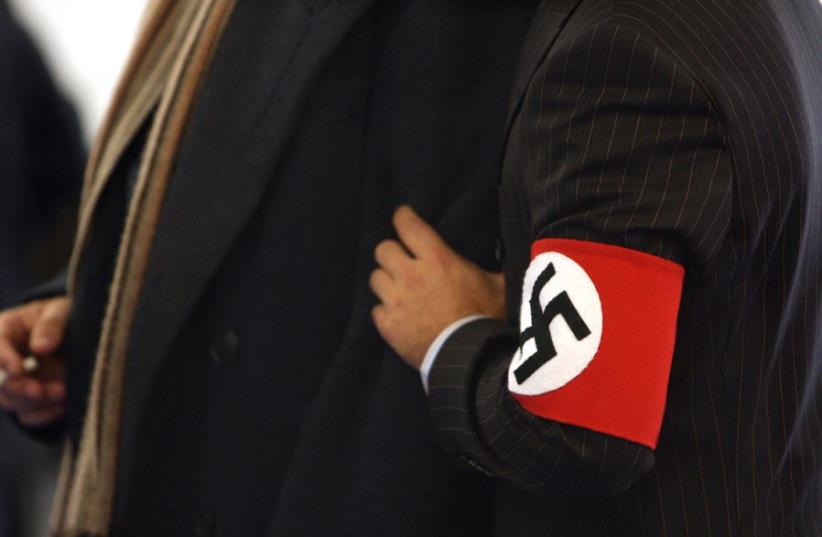 A man wears a costume with a swastika armband
(photo credit: REUTERS)
Advertisement
A pensioner has become the first UK citizen to be investigated for Nazi war crimes by German prosecutors for his alleged role in the Holocaust.96-year-old Stanislaw Chrzanowski, who died in October 2017 without being aware of the case, was under investigation by Munich prosecutors for his role in the murder of civilians in his home town of Slonim, Belarus during the Second World War.Chrzanowski settled in the UK after being taken as a prisoner of war and later joining Allied forces. In the 1990s, Chrzanowski's step-son John Kingston informed London's Metropolitan Police of his suspicions, having heard stories as a child relating to his step-father's role in the Slonim murders.Kingston, who died last week, also traveled to Slonim, where he heard testimonies from local residents who claimed they witnessed Chrzanowski working as an auxiliary policeman, cooperating with Nazi troops and shooting prisoners in nearby forests.The Jewish community of Slonim, which once made up approximately 80% of the town's population, was wiped out during the Holocaust.According to the BBC, Chrzanowski was questioned by Metropolitan Police detectives following Kingston's allegations, but officials lacked sufficient evidence to take action. The case was reopened last year when German prosecutors, based in Ludwigsburg, requested access to interview transcripts. They ruled that there was sufficient evidence to pursue a criminal investigation and prosecute Chrzanowski in Germany. Chrzanowski consistently denied his involvement in the crimes.German prosecutors told the BBC that the investigation represented an important precedent, permitting them to take action against alleged Nazi war criminals accused of murder, regardless of their nationality, the nationality of their victims or the location of the alleged crimes.Prosecutors also said they were now using British immigration records to search for possible new suspects.One of Chrzanowski's former neighbors, 91-year-old Bruno Alsdorf, told the Daily Mail that he was not willing to discuss his activities during the Second World War."I knew he was Eastern European but we never spoke about the war. He was protective about his past but many people who lived through the war were like that in my experience," said Alsdorf."He used to grow plums and oranges in his back garden. He told me he loved fresh fruit and said he always reminded him of when he was a child when he went searching for berries in the woods where he lived."