Picasso work stolen by Nazis sells for $45 million at auction 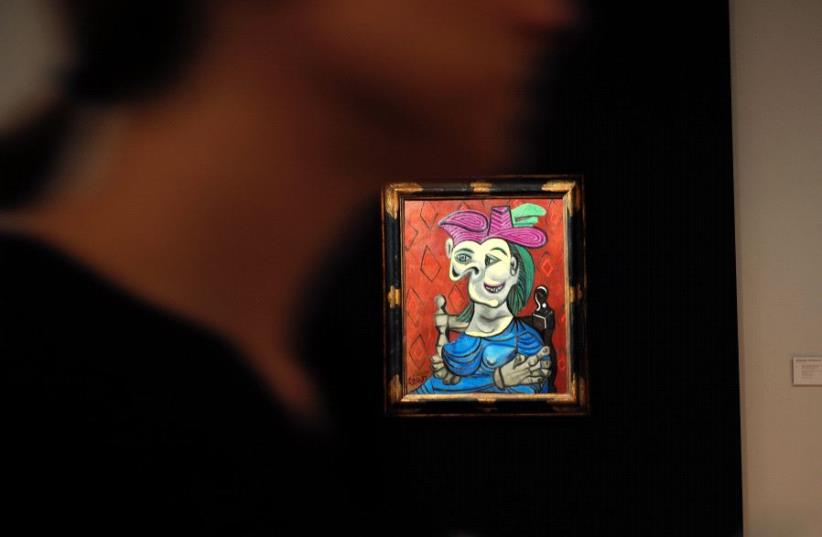 Visitors walk around Pablo Picasso's depiction of Dora Maar in "Femme assise, robe bleu", May 2017.
(photo credit: JEWEL SAMAD / AFP)
Advertisement
A painting by Pablo Picasso, stolen in 1940 by the Nazis from a Jewish art dealer in occupied France, has been sold at auction for more than $45 million.The 1939 "Femme assise, robe bleu" painting was sold for $45,047,500, towards the upper end of its pre-auction estimate, at a Christie's auction in New York on Monday. The painting features a portrait of Dora Maar, one of Picasso's lovers who was depicted in several of his artworks. According to Christie's auction house, Jewish art dealer Paul Rosenberg paid 50,000 francs for the painting in early-1940, which was subsequently confiscated by the Nazis following his family's decision to leave France for New York later that year.The Nazi Einsatzstab Reichsleiter Rosenberg group (ERR) was responsible for the confiscation and transfer of fine arts to Germany during World War Two. The ERR discovered Rosenberg's collection and stored the artwork at the Jeu de Paume in Paris. The painting was recovered in a French Resistance operation, coincidentally led by the art dealer's son, in 1944. The story of its recovery was later depicted in "The Train", a 1964 film directed by John Frankenheimer. In 2015, another of Picasso's works, "Les femmes d'Alger (Version "O")," sold for a record-breaking $179 million at a Christie's auction.