BDS and Pro-Palestinian activists lament the glorifying of "Israeli policy of settlement construction." 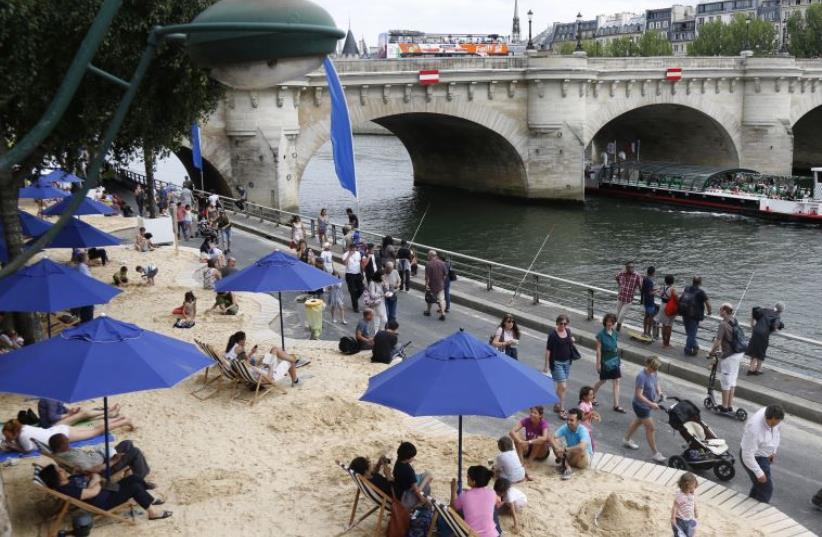 People relax as "Paris Plages" (Paris Beach) opens along the banks of River Seine in Paris, France, July 20, 2015.
(photo credit: REUTERS)
Advertisement
A major security operation has been mounted in Paris for Thursday’s Tel Aviv- sur-Seine event organized by the French capital’s municipality within the framework of the annual Paris-Plages (Paris Beaches) initiate.At least 300 policemen will be deployed between Pont d’Arcole and Pont de Notre Dame and in the surroundings, according to sources with the Paris Police. This part of the Seine River will be transformed for one day, from 10 a.m. to 10 p.m., into an Israeli-looking beach, with Jewish food stands, Hebrew music (including a DJ in the evening) and beach volleyball, as part of the monthlong event.Jews in the city told The Jerusalem Post they fear the worst: out - bursts and things getting out of hand, with anti-Israel demonstrators mounting attacks in the nearby, heavily Jewish rue des Rosiers in the Marais quarter.The monthlong festival turns the banks of the Seine River and the Bassin de la Villette artificial lake into beaches, trucking in sand and other coastal paraphernalia. This year, each day will be dedicated to a different famous beach around the world, and on Thursday, the outdoor space is slated to be turned into the shores of Tel Aviv.“The city is transformed for one month to embody the carefree and quiet nature of summer,” Paris Mayor Anne Hidalgo wrote about the event. “Whether or not the sun is shining, Parisians and tourists can enjoy sport, activities, games, culture and relaxation... This great feast allows everyone to change the scenery in their own city – to travel near home and escape from everyday life without leaving Paris.”First Deputy Mayor Bruno Julliard told Reuters, “We must put in the limelight those who support values that our close to ours, which is the case of Tel Aviv, a city that is often detested by the most radical Israelis.” According to sources in the Paris Municipality, the decision to include Tel Aviv this year was made when Hidalgo visited Israel and the Palestinian territories in May.“She announced her desire to strengthen the exchange ties between her city and the local authorities of the two countries,” they said. But across social media, and even among local politicians, the decision has caused an out - c r y.It started during the week - end with Danielle Simonnet, a municipal lawmaker from the Left Party who called for the day devoted to Tel Aviv to be canceled.“Just one year after the massacres in the Gaza Strip by the Israeli state and army, the City of Paris dares to organize in the frame of its cultural partner ships with the big cities of the world a day honoring Tel Aviv,” she protested in Tweeter. Simonnet, who for the last seven years has represented the French capital’s 20th district – which has a large Arab population – said the daylong festival “sends a very bad message.” She also said: “For the Israeli government, this is a nice bit of PR that Paris is serving up on a plate.”On Sunday, the National Bureau for Vigilance Against Anti-Semitism, or BNVCA, condemned Simonnet for her calls to cancel Tel Aviv-sur-Seine and said the mayor should not yield to her pressure and to that of the CAPJPO-EuroPalestine group, which called for protests of the event. BNVCA has asked the police to bolster security during the festival day out of fear of anti-Semitic attacks.On Tuesday, EuroPalestine qualified the Israel event as “scandalous propaganda of the Israeli terrorist state.” The organization said 15,000 people had already signed the online boycott call.And Socialist Party member of parliament Alexis Bachelay wrote: “Imagine a Pretoria-sur-Seine at the time of the Apartheid in South Africa... And probably the regime there was softer than the far-right governing in Israel.”The municipality explained that “the whole idea of Paris-Plages and of this specific day is to allow Parisians who can’t go on a trip to travel a little bit.” It also said security measures will be taken “at a maximum level” together with the Paris Police.The Tel Aviv-sur-Seine affair became the main issue this week in Paris, surprising and sometimes shocking some of its habitants like my neighbor Miss Sylvie Lafontaine, an actress: I don’t understand: With all what’s going on it should be the moment to share... I reject the polemics,” she said.Responding to her detractors, Hidalgo published an article in Le Monde Wednesday titled, “Why we are welcoming Tel Aviv in Paris Beaches.”“Since the coastal city, well appreciated in the entire world, is also the first city of the Israeli opposition... Tel Aviv remains an open city to all minorities, also sexual ones, creative, progressive and hated by all the intolerant in Israel,” she wrote.Canceling the event would be “counterproductive,” the mayor said. “All are welcome,” she concluded in a call to Parisians.Prime Minister Manuel Valls said on Twitter: “Total support to the initiative of the city of Paris #TelAvivsurSeine.”“Let’s stop the outpouring of stupidity,” he said of criticism of the event, Reuters reported.Eytan Schwartz, Tel Aviv Mayor Ron Huldai’s adviser for foreign affairs, wrote on his Facebook page: “We have friends in France and it is inspiring that they are standing by our side.”