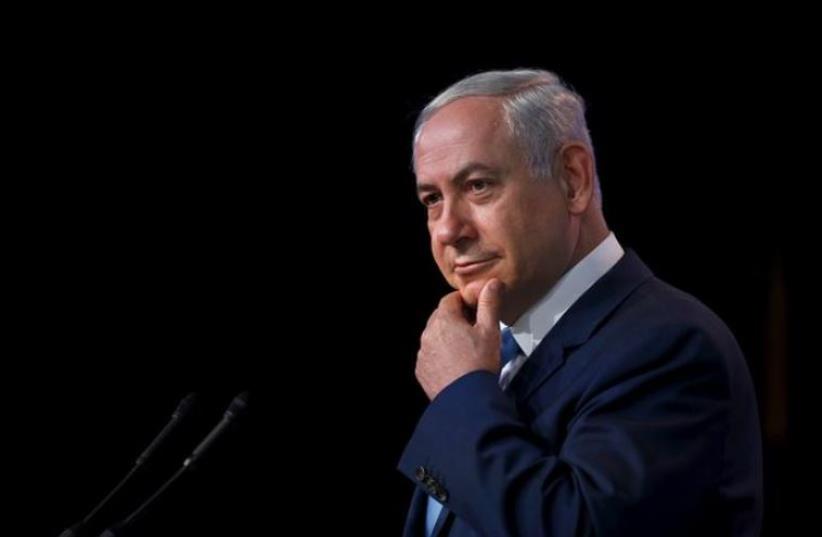 Israeli Prime Minister Benjamin Netanyahu pauses as he delivers a speech at the Jewish Federations of North America 2015 General Assembly in Washington November 10, 2015.
(photo credit: REUTERS)
Advertisement
Prime Minister Benjamin Netanyahu is expected to address the Jewish Federation of North America’s General Assembly next month via satellite feed, government sources said on Sunday, pushing back against reports that he would not appear at the annual event because of a growing rift with American Jewry over issues regarding the Western Wall.The sources said Netanyahu’s schedule will not permit him to attend the November 12 to 14 meeting in Los Angeles, but that the Prime Minister’s Office was in talks with organizers to schedule the satellite feed.
Netanyahu addresses the Jewish Federations of North America
Because the Federation’s general assembly, which is regularly held in November, comes on the heels of September’s UN General Assembly meeting in New York, the prime minister does not generally attend – which would necessitate flying to the US twice in the span of a few weeks – preferring instead to address the gathering via satellite hook-up or in a recorded message.There have been a few exceptions, such as in 2015, when he attended the event after meeting with then-president Barack Obama in Washington for the first time after Netanyahu’s controversial speech to Congress about the Iranian nuclear deal in March of that year.President Reuven Rivlin is scheduled to attend the Los Angeles event, but was apparently invited only after Netanyahu informed organizers that he was unable to take part. This would dispute claims that the real reason Netanyahu did not want to attend the general assembly was because he did not want to share the stage with Rivlin, with whom he has often had a contentious relationship.