This briefing came after the Knesset indefinitely froze its Western Wall resolution and approved a bill granting the Chief Rabbinate a total monopoly on conversion. 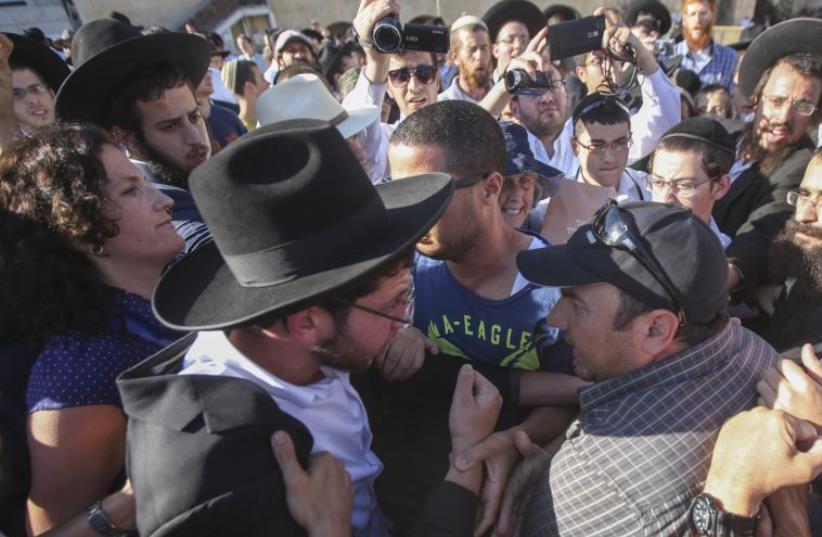 Altercation between haredi and non-Orthodox worshipers at the Western Wall, June 16, 2016
(photo credit: MARC ISRAEL SELLEM/THE JERUSALEM POST)
Advertisement
Israeli diplomats in the United States are refusing to follow instructions from Prime Minister Benjamin Netanyahu's office directing them to blame the Reform and Conservative movements for a string of recent religious controversies, reported The Jerusalem Post's sister publication Maariv on Friday.The Prime Minister Office in response vehemently denied the report. Officials, however, confirmed that there was a briefing by the PMO with Israel's representatives in North America but that no order to blame the Conservative or Reform movement was given.
Naftali Bennett addresses government decisions on Western Wall, conversion
Maariv reported that Netanyahu's foreign policy advisor Dr. Jonathan Schachter held a conference call with numerous ambassadors and consul personnel in North America in reaction to the crisis, saying that the Conservative and Reform Jews are to be held responsible for the situation. This briefing came after the Knesset indefinitely froze its Western Wall resolution and approved a bill granting the Chief Rabbinate a total monopoly on conversion. The conversion bill was later put on ice after Netanyahu and Knesset members agreed to table the legislation. The cabinet decision to repeal the resolution creating a state-recognized egalitarian prayer section at the southern end of the Western Wall put an end to dreams of the Reform and Conservative movements of a grand site for their worshipers at the heart of the Jewish homeland.Participants in the conversation told Maariv that they were in shock after receiving the PMO's directive and requested the instructions in writing. "It is unbelievable that after all this, the PMO is asking that we blame American Jews, who have already suffered enough from the government's decisions," said one of the diplomats who spoke with Maariv.US Jewish groups have expressed concerns over the recent actions taken by the prime minister and Knesset lawmakers, claiming that they are damaging ties with the Diaspora who feel they are being marginalized for their religious affiliation.In fact, high-level representatives from the influential American Israel Public Affairs Committee (AIPAC) met with Netanyahu on Thursday to relay the concerns of their constituents who are angered by the situation. Netanyahu told the delegation that he was faced with little choice on the matter, presented with either acquiescing to the demands of the ultra-Orthodox or losing his government.Officials who have talked with Netanyahu about the issue in recent days say he is aware of the gravity of the decisions and the strain they have caused with American Jewry, but that the haredi (ultra-Orthodox) parties gave him an ultimatum. AIPAC has been flooded with calls from constituents, some asking what the organization is going to do and others telling it not to get involved. The organization has also heard from the offices of some US legislators, saying they have received angry inquiries from voters in their districts.

Herb Keinon and Jeremy Sharon contributed to this report.