The "Silent Heroes" campaign will distribute country-wide posters in a search for witnesses of rescues. 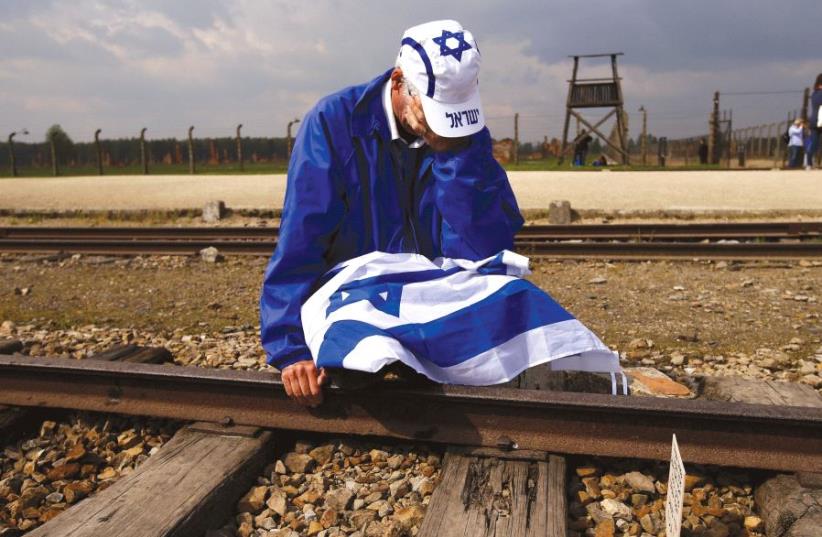 A man sits on the railway tracks in the former Nazi death camp of Auschwitz-Birkenau as thousands of people, mostly youth from all over the world, gather for the annual March of the Living t
(photo credit: REUTERS)
Advertisement
Holocaust-commemoration activists in Poland with British government funding launched a last-ditch effort to interview witnesses to attempts to rescue Jews from the genocide.The campaign, titled “Silent Heroes,” was announced Thursday at a news conference in Warsaw that was organized by the From the Depths organization and attended by the United Kingdom’s Special Envoy for Post-Holocaust Issues, Eric Pickles, and the head of Poland’s largest Jewish organization, TSKZ President Artur Hoffman.One witness who was interviewed last month, Natalia Jakoniuk, suffered a debilitating stroke the following week, demonstrating how “time is of the essence and not on our side,” From the Depths founder, Jonny Daniels, said.Under the new campaign, in which journalists and researchers conduct filmed interviews with witnesses, posters asking witnesses to step forward will be placed in government offices with nationwide distribution.In her testimony, Jakoniuk, who was a child younger than 10 during World War II, said she recalls people living in the attic of her home in the village of Przeradz Maly outside Warsaw. “They didn’t tell us, the children,” she said of her parents. But they did instruct her to be “on the lookout, to see if the German gendarmerie who invaded Poland were coming.”One time, when she was six years old, she was told to run to neighboring village to warn the residents that the Germans were coming, she said. “That was my job,” she recalled in the interview. That year, a German soldier inspected their house and complimented her mother on how tidy it was, not knowing there were Jews hiding in the attic.“If he had taken a ladder and climbed up to the attic, we would have all been killed,” she said.From the Depths attempts to substantiate the testimonies it is collecting with Poland’s Institute of National Remembrance and other archives, Daniels said.Yad Vashem, the Jerusalem-based Holocaust museum, is the authority entrusted by Israel’s government to confer the title of Righteous Among the Nations on non-Jewish people who risked their lives to save Jews. The rigorous vetting process requires testimonies by several people who witnessed the attempt. The cases documented by From the Depths may not pass this vetting “simply because not all rescue cases had witnesses,” Daniels said, adding: “This is about documentation, not titles.”Hoffman said his motivation for making TSKZ a partner in the project is that: “The world needs to see what good people can do in bad times, what being a true hero is.”Poland under President Andrzej Duda of the right-wing Law and Justice Party has highlighted the actions of Poles who saved Jews, including by opening a museum for them.Critics of Poland’s government, including the country’s main federation of Jewish organizations, allege that its nationalist agenda is emboldening anti-Semites and that its emphasis on rescuers must not come at the expense of efforts to research and expose collaboration by Poles and atrocities by locals against Jews.