Ahead of town rivalry game in Polish city of Łódź, ruffians reportedly held rally against team that is often derided as "Jewish." 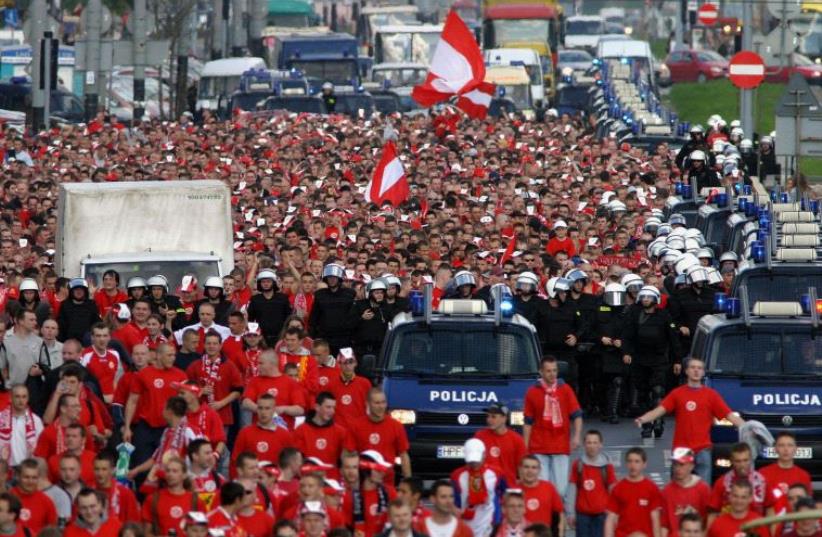 Polish soccer fans of the Widzew Lodz club escorted by police [File]
(photo credit: REUTERS)
Advertisement
A group of soccer hooligans in Poland torched effigies representing Jews and displayed banners calling for Jews to be burned in a shocking display during a match last Friday, according to local media reports and a global anti-Semitism watchdog. The incident occurred when dozens of fans supporting the Widzew Łódź side rallied against the town rival ŁKS Łódź, which is often derided as "Jewish" by opposing teams' fans, in a similar fashion that the British team Tottenham Hotspur is regarded.The rally took place ahead of the derby match at a local train station in the central Polish city that used to boast a large Jewish population prior to WWII.According to a weekend report by the Coordination Forum for Countering Antisemitism, the demonstrators at the rally unfurled a banner printed with the slogan  "19.08, today the Jews were named," in reference to the year ŁKS Łódź was established."Let them burn, motherf***ers," continued the banner's illicit message.  The report noted that images taken at the event showed the ruffians igniting strung-up effigies donned in attire apparently representative of Orthodox Jews.Debates over Poland's attitude toward anti-Semitism have previously erupted over the contentious practices of some of the country's soccer fans.However, in 2014, a Polish municipal prosecutor in Poznań ruled that chants by soccer fans are not deemed criminal offenses. Following the decision, European Jewish Congress President Moshe Kantor condemned the reaction of authorities in the face of the offensive, prejudicial actions of soccer fans. "Unfortunately, extreme anti-Semitic chants like those in Poznan are regularly heard in many European stadiums, including in England and Holland, and the reaction of the authorities is minimal," CNN quoted him as saying.