One poster compared Zionism to Nazism, calling Gaza the “largest concentration camp in the world.” 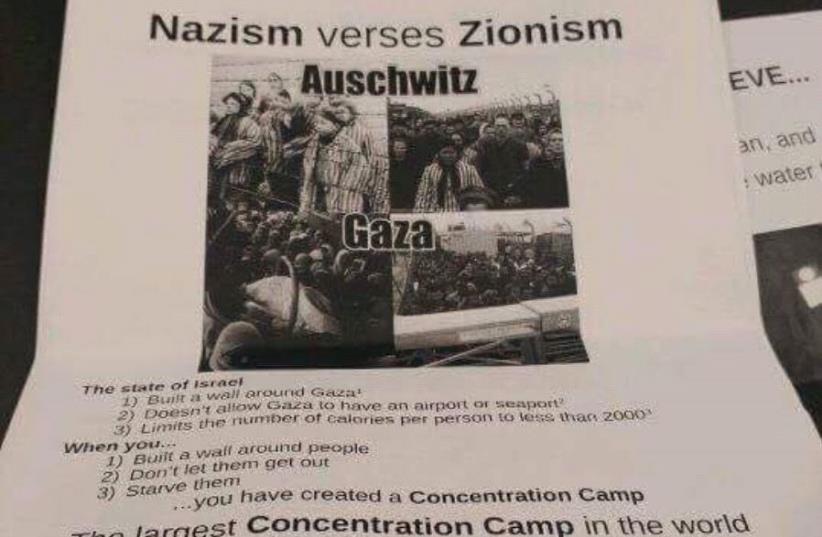 Poster comparing Zionism to Nazism found on the UIC campus.
(photo credit: EVA ZELTSER)
Advertisement
A University of Illinois student discovered piles of various antisemitic posters in the library on Saturday, after a flyer calling for the end of “Jewish privilege” made waves across the campus earlier last week.One, found pinned to a wall, repeated the charge of the previous poster, which read, “Ending white privilege... intersects with ending Jewish privilege.” A table showing the high percentage of Jews that attend several top US universities was printed under the words “Why do they get a special privilege when it comes to top universities?” At the bottom of the poster were the hashtags #Black- LivesMatter, #WeAreAllMuslim and #WhitePrivilege.A second poster challenged laws around the world against Holocaust denial, and a third criticized the university’s withdrawal of Steven Salaita’s appointment at the school over anti-Israel tweets and questioned the influence of Jewish donations to the university. Yet another poster in this series compared Zionism to Nazism, calling the Gaza Strip the “largest concentration camp in the world.”Each poster ended with the assertion that its content is not antisemitic, with variations on the following statement for the latter flyer: “Standing up for Palestine is not antisemitic. It is not defamatory. It does not insult anyone. It is social justice.”The author of these posters is unknown. Campus organization Hillel convened a meeting last week for students and the dean of students, having been approached by students who were upset by the flyers. Hillel asked the university to conduct a full investigation into the matter and to “address the campus culture that would allow such hateful targeting of Jews.”
Trump decries antisemitism after long silence (credit: REUTERS)
On Wednesday evening, the university released a statement denouncing the posters and stating that an investigation had been opened. “Acts that invoke hatred or violence toward members of our community will not be tolerated on our campus,” read the statement, which was signed by Chancellor Michael D. Amiridis.“We appreciate that Chancellor Amiridis immediately and unequivocally called the flyers antisemitic. Based on the dramatic rise of antisemitism on college campuses, this could have happened anywhere and universities need to have zero tolerance for antisemitism,” Hillel said in response.“We will not let these hateful flyers deter us from our work to build a vibrant community at UIC,” Rabbi Seth Winberg, Hillel’s executive director, told The Jerusalem Post on Sunday.“We had a wonderful Shabbat dinner celebration on Friday, as we do every week, and all students are always welcome to participate.”Eva Zeltser, president of the university’s Rohr Chabad House, shared the offending posters on social media, garnering thousands of views. “Looks like antisemitism is still alive and well,” she told the Post on Sunday, noting that she had also received a death threat.Also Saturday, 100 leaflets with hand-drawn swastikas were scattered across the front yard of the Chabad Jewish Student Center at Wall Street, just opposite the Virginia Tech University campus.The incident occurred one day after Chabad announced that it will be hosting renowned holocaust survivor Rabbi Nissen Mangel for a lecture at Virginia Tech in April.A report was filed with the Blacksburg Police Department, which Chabad lauded for its professional response.Chabad also praised Virginia Tech president Timothy Sands for supporting the Jewish community and said it was cooperating with the administration to respond to the incident.“Here at Chabad, we plan to continue to fight hatred by increasing our efforts in spreading Jewish pride and the beauty of our heritage,” said Rabbi Zvi Yaakov Zweibel, codirector of the Chabad Librescu Jewish Student Center at the university.“Although hatred has existed against the Jewish people for generations, we will always continue to thrive and grow as a community and as a people.”Chabad planned a solidarity event for Monday at the Graduate Life Center Plaza, set to be attended by Zweibel, university officials and the Virginia Tech Police Department.“We are positive that the increased light that we shed will overpower the darkness of senseless hatred,” said Zweibel.