Did President Trump borrow material from a racist Redditor? 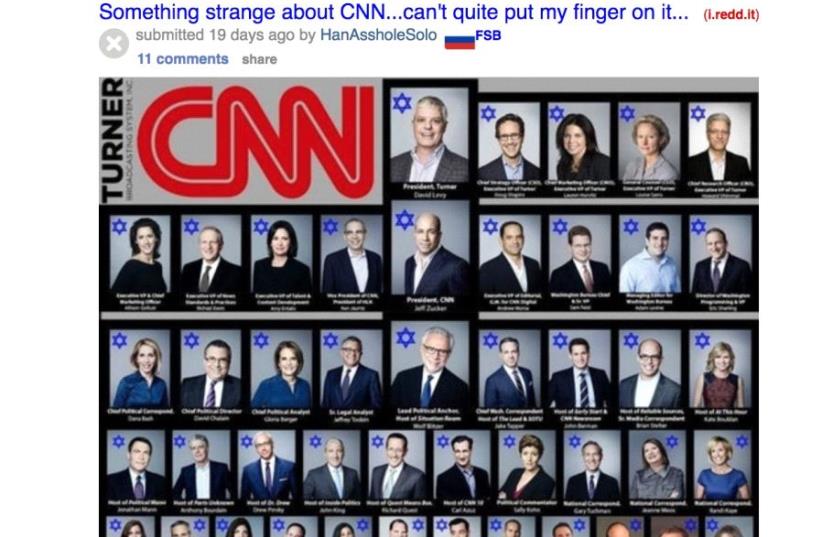 CNN doctored image presenting staff with Stars of David
(photo credit: JPOST STAFF)
Advertisement
The now infamous video that President Donald Trump tweeted, in which he beats a man who is presented as CNN, was apparently created by a Reddit user who has a history of posting racist and antisemitic content.The user who made the original video, identified only as 'Hanassholesolo,' was delighted to be noticed by the presidential social media team.“Wow!!” he wrote, “I never expected my meme to be retweeted by the God Emperor himself!!!”It was noticed and tweeted by the American writer and political commentator Jared Yates Sexton that 'Hanassholesolo' had a long history of posts which were racist, antisemitic and anti-Muslim, including a modified image of the CNN staff showing the various members of the network marked with Stars of David. The image bore the caption of “Something strange about CNN…can’t quite put my finger on it,” suggesting that the global media outlet was controlled or influenced by people who are Jewish. The user had been very active on a section of Reddit called 'The Donald,' in which users often expressed feverish support of President Trump and equal contempt for those whom he found objectionable.Sexton wrote on his Twitter account that, since revealing the antisemitic CNN graphics, he had been told twice that he would be killed “in a new Civil-War.” “It’s everywhere now,” he warned, “These people talking about civil war. Shooting, hanging, beating journalists to death. This is real.”  Twitter users reacted emotionally to the doctored image of the CNN employees which was exposed by Sexton.

So wrong on so many levels. Jewish family members. I fear for them and all of us.

This is terrifying. Truly. And sickening.

So wrong on so many levels. Jewish family members. I fear for them and all of us.

The unbelievable ignorance of this imagery resurrects the evil my Father and so many others bled and died in defeating.

The wrestling video effectively presented the US leader as a man determined to fight, head-on, media outlets he claimed were biased against him or his policy. CNN communications' Twitter account replied to the tweet by tweeting a quote by White House aide Sarah Huckabee Sanders, in which she stated on June 29 that "The President in no way form or fashion has ever promoted or encouraged violence.”
Advertisement
Hot Opinion