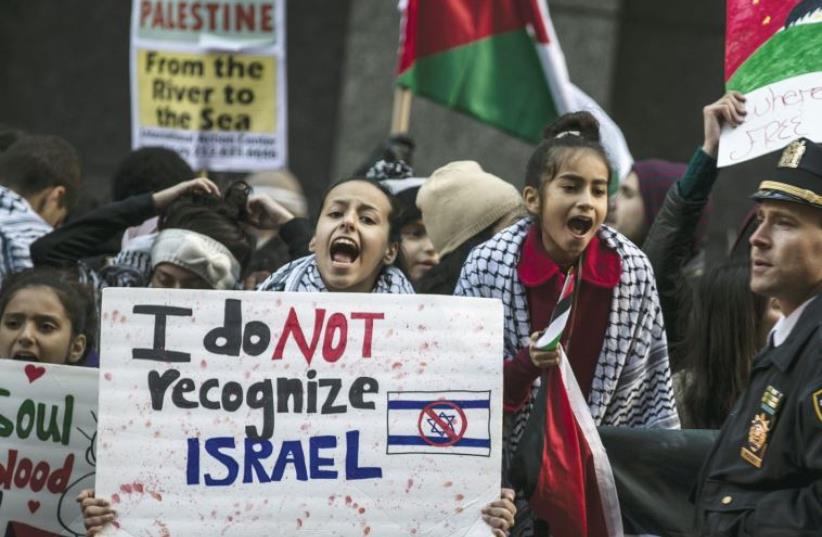 A demonstrator chants slogans during a pro-Palestinian protest in Times Square, in Manhattan
(photo credit: CARLO ALLEGRI/REUTERS)
Advertisement
A high school student, with help from the pro-Israel activist group StandWithUs, has won a formal probe against his Houston public school which refused to put an end to harassment of Jewish students by anti-Israel students identifying with Hamas. The anti-Israel students have replaced hung Israeli flags with Palestinian and Iranian flags, and have called for an intifada.The incident is part of an increase in anti-Israel activity on high school and college campuses in the US, but has some extra shock value coming from the generally very pro-Israel state of Texas.In November 2015, anti-Israel students at Eliav Terk’s public high school in Houston (Carnegie Vanguard High School) tore down Israeli flags during an international festival, replacing them with Palestinian and Iranian flags.They then “ran around school wearing Hamas-affiliated scarves,” saying “Jerusalem is Ours” and “We’re coming for It,” while waving a large Palestinian flag, a statement from Stand- WithUs noted.Also around this time, a student from the anti-Israel group posted an anti-Semitic cartoon on Twitter calling for an intifada and showing a long-nosed and evil looking, kippa- clad Jew throwing a net over a computer opened to Facebook.Terk approached the school’s vice principal and principal asking them multiple times to address the offensive conduct.According to StandWithUs, “School administrators informed him that no action would be taken. Terk was told by the administrators that the anti-Israel students must be excused for their behavior because they are part of an ‘oppressed and victimized’ people.”Further, “Eliav was also told that the anti-Semitic Twitter cartoon was part of a larger political conflict with which Eliav should try to empathize.”At a StandWithUs counter BDS conference in April 2016, Terk approached the legal department for help.Working with pro bono legal counsel, he used meticulous notes, pictures, and screenshots of the students’ offensive conduct and the administration’s complacency to file a grievance with the Houston Independent School District.He claimed that the school “violated district policy by ignoring harassment against Jewish students based on their national origin, religion and/or political affiliation, and creating a hostile educational environment.”Terk also requested a formal investigation and new procedures to “prevent further acts of intimidation, vandalism, bullying, and offensive conduct” against Jewish students, and if warranted, disciplinary proceedings against the relevant school administrators.Recently, the regional superintendent informed Terk that a full investigation has begun and that going forward Jewish students who are harassed can go directly to the  regional superintendent for help.“StandWithUs is so proud of Eliav and this tremendous success,” said Roz Rothstein, CEO of StandWithUs. “Eliav has shown that through courage, persistence, documenting evidence, and teamwork, anti-Israel and anti-Jewish bullying will not be tolerated. It will be exposed and there will be repercussions.”