‘Their plan has been derailed but this has not stopped them’ 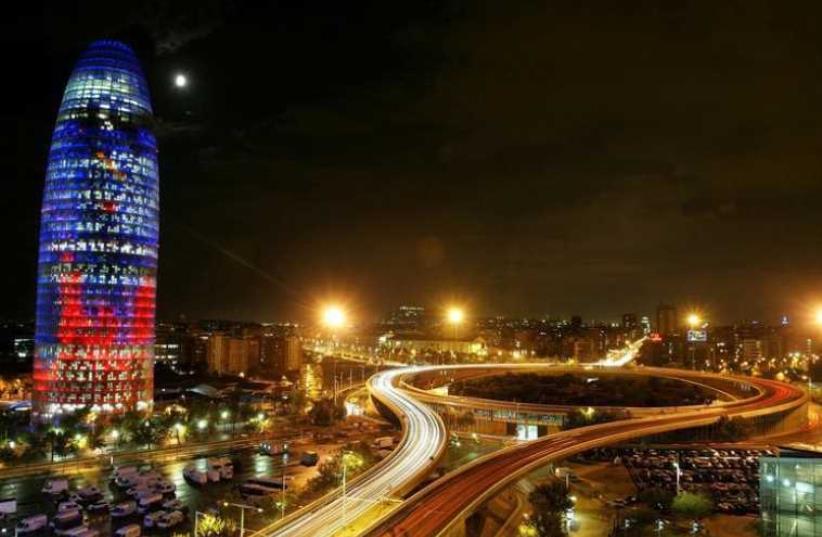 The Agbar Tower (L) in Barcelona
(photo credit: REUTERS)
Advertisement
ACOM, a pro-Israel group working to combat the Boycott, Divestment and Sanctions movement in Spain, said it is contemplating legal action against the City Council of Barcelona over its recently announced anti-Israel resolution.Last week, the Presidency Commission of the Barcelona City Council issued a declaration calling for an end to Israel’s “violations of international law.” While the council fell short of issuing full support of BDS and declaring itself “Free of Israel Apartheid,” its declaration did give a nod in support of the movement.“The agreement of the Presidency Commission decides to explore ways in which to demand – from public contractors and suppliers – declarations of non-relationship with Israel, under the pretext that Israel does not respect International Law,” an ACOM statement explained.On Tuesday, ACOM president Angel Mas told The Jerusalem Post that the declaration by the Barcelona City Council represents a new strategy by pro-BDS movements in Spain.“We have to be very clear about what actually happened in Barcelona. Extreme Left parties have gained access to many municipalities [throughout Spain], including control of the large municipalities in Barcelona, Madrid and Valencia. Their original plan was very clear – to have very significant parts of Spain become ‘Judenfrei,’” Mas said, using the German term for “Free from Jews.”However, according to Mas, that plan was met with severe opposition in the media, certain branches of government and the courts.Thanks to ACOM’s numerous legal actions in collaboration with US based The Lawfare Project, against municipalities which have declared support of BDS, a number of Spanish courts have unequivocally declared BDS resolutions to be illegal.“From a legal perspective they are suffering severe losses. The courts have taken an interest and declared that the boycott is illegal because it represents a breach of basic constitutional rights, abuse of civil liberties, and abuse of state institutions that should keep a clear neutrality in how they treat different citizens,” Mas said. “Their plan has been derailed but this has not stopped them.”
Spain branch of BDS to Jpost : Matisyahu justified Israeli crimes
As such, the declaration in Barcelona represents a shift in the BDS movement’s strategy – making an anti-Israel declaration but stopping short of declaring the city “Free of Israeli Apartheid.”“Frankly, it’s the same thing,” he said, “The substance is the same. To discriminate against citizens, you can do so in many ways. The fact that a part of a government declares their sympathy and their willingness to cooperate with a movement that is discriminatory, racist, and antisemitic is, in our opinion, illegal and unconstitutional.”Mas added: “What is very clear is that in Barcelona there is a very radical extreme Left Mayor and extreme Left government coalition.And they are pushing for additional measures and actions that simply increase the level of activity against Israel, and this obviously affects the Jewish community.”Following the municipality’s declaration, Rafeef Ziadah, a member of the International Secretary of the Palestinian National Committee of BDS issued a statement to the media in which he welcomed the resolution.“This resolution is an institutional recognition of civil society demands for an end to complicity in violations of international law through nonviolent struggle, as practiced by the BDS movement,” Ziadah said.He added: “We hope that this resolution creates a precedent in Barcelona so that the city goes on to become an area free of Israeli apartheid, as has already happened in 70 local authorities throughout Spain, and becomes a leader in defense of people’s freedom and human dignity.”Mas said that in addition to contemplating legal action, ACOM had denounced the declaration as “another step in the general hostility – not just against Israel, not just for the criminalization of Israel – but also the hostility against the Jewish community in Barcelona, the second largest in Spain, that is naturally pro-Israel.”Earlier this week, ACOM released a report in collaboration with NGO Monitor that outlined public funding from Spain to “politicized NGOs involved in the Palestinian- Israel conflict.”The report found that public funding has been repeatedly granted to NGOs which carry out political campaigns against Israel.It further stated that several of these organizations have ties to “terrorist organizations, promote antisemitism, incite violence and are involved in BDS campaigns.”In 2015 alone, the report revealed, politicized Spanish funding for NGO activities in the Palestinian- Israeli conflict amounted to more than 5.1 million euros.“Funding is flowing to these groups from municipal governments, including Catalonia and Barcelona, which are a hotbed of funding for very hostile BDS groups,” Mas said.“What is happening here is that there are massive public funds being diverted to these groups, and in turn these groups gain visibility because they have a lot of resources and a lot of funding.Then, with public money from state institutions, they then go and use these institutions to further their cause. It is a vicious circle.”