"Levin will not teach us what it means to support the State of Israel," says president of the Union for Reform Judaism in North America. 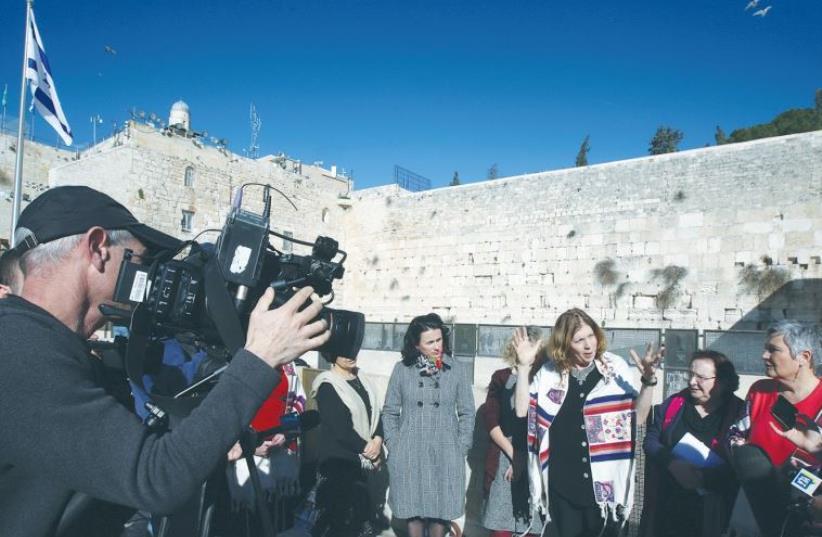 ANAT HOFFMAN (center), director of Women of the Wall, speaks to reporters at the Kotel yesterday.
(photo credit: MARC ISRAEL SELLEM)
Advertisement
Leaders of Reform Judaism have fired back at Tourism Minister Yariv Levin following his refusal to retract criticism he made of the movement last week.Rabbi Gilad Kariv, chairman of the Reform movement in Israel, on Wednesday escalated the conflict between the movement and the Likud minister, who is opposed to the construction of a new section at the Western Wall for pluralistic prayer.Levin said in the aftermath of a cabinet vote approving the pluralistic prayer site that it would not be needed in two or three more generations, because there would no longer be Reform Jews due to assimilation.In a letter to Reform congregations in the US, Kariv called for the Jewish Agency and the Jewish Federations of North America not to undertake any cooperation with Levin until he retracts his words.Levin was condemned for his stance by Bayit Yehudi chairman Naftali Bennett and Kulanu MK Michael Oren, a former ambassador to the United States. Prime Minister Benjamin Netanyahu joined the chorus of condemnations on Wednesday.Rabbi Rick Jacobs, the president of the Union for Reform Judaism, the movement’s congregational arm in North America, said: “As long as he [Levin] thinks Diaspora Jewry has no right to voice an opinion on subjects such as the Western Wall, we will not give him a platform in the Jewish communities and organizations in the United States.Levin will not teach us what it means to support the State of Israel.”Following the announcement, a meeting arranged by the Foreign Ministry for early next month between Levin and representatives of Reform groups from the United States was canceled.