According to the International Fellowship of Christians and Jews, many olim seek security in Israel. 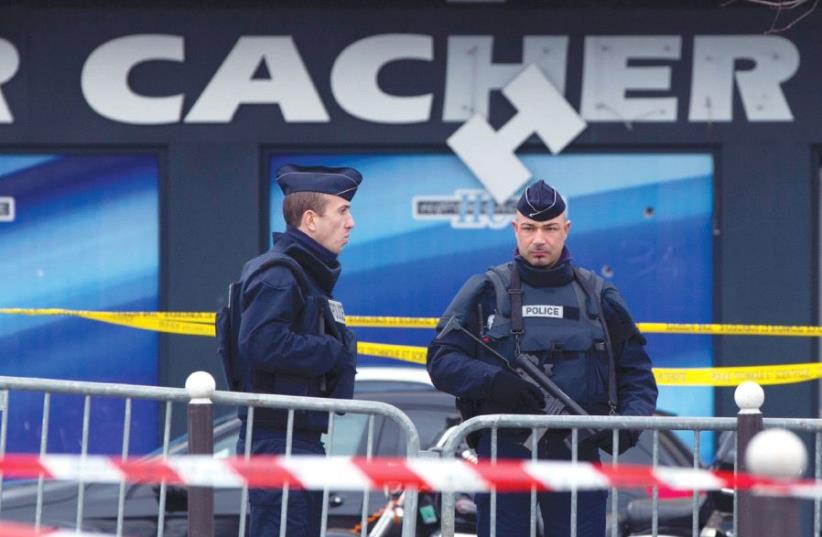 FRENCH POLICE OFFICERS stand guard outside the Hyper Cacher supermarket in Paris on January 10, 2015.
(photo credit: YVES HERMAN / REUTERS)
Advertisement
A sister-in-law of a victim in the 2015 Paris supermarket terrorist attack has immigrated to Israel, fleeing a sense of insecurity living as an Orthodox Jew in France.Eva Saban was one of 150 French Jews who arrived at Ben-Gurion Airport on Tuesday evening aboard a flight sponsored by the International Fellowship of Christians and Jews.“We have been wanting to make aliya for a while, but after the terror attack at the Hyper Cacher we were left with no doubts. We are living in fear,” Saban said.Her brother-in-law Philippe Braham was one of four people killed after being taken hostage in the kosher supermarket, shortly after the Charlie Hebdo terrorist attack.“Our children go to an Orthodox school, and as they leave the building they remove the kippa from their head,” she said. “We no longer are sure of what we would like to do next, but we are confident that this is the right move for our children, and we pray to God it will all work out.”The immigrants ranged from one month to 77 years old. Among them were two families spanning three generations, and 77 of the new olim were children.Many of those arriving are from lower- middle-class backgrounds and will receive assistance from the fellowship in their absorption. The olim plan to settle throughout Israel, including in Netanya, Ashdod, Ariel, Hadera, Haifa, Jerusalem, Modi’in Illit, Ra’anana and Tel Aviv, though most will live in Ashdod or Netanya.According to the fellowship, about 80% of the olim come from suburbs of Paris, where there are large Muslim populations, and have expressed living in a state of tension and even persecution. Many of the parents said they sought a better and safer future for their children in Israel.“Aliya has always been and is still a determining factor in Israeli society,” said Rabbi Yechiel Eckstein, president of the fellowship. “The olim coming on aliya from France have experienced some terrible incidents of hatred directed at them for one reason only – simply because they are Jewish.”The Jewish Agency conveyed a contrasting message last week, when 200 French immigrants arrived in Israel on the largest aliya flight scheduled to arrive from Europe this summer.“Immigrants from France make aliya out of choice and not as an escape: a world of possibilities is open to them and they choose to come to Israel,” Jewish Agency Chairman Natan Sharansky said. “Their choice points to the importance of Jewish identity and the sense of belonging that the State of Israel can give to Jews who want to take part in the great Jewish story.”French immigration to Israel has surged since 2012, breaking records for aliya from Western countries. More than 10% of the French Jewish community has immigrated to Israel since 2000, with half of them arriving in the past five years alone.