David Brooks has used sexuality as a framing mechanism before, as in 2010, when, during an interview with Stephen Colbert, he called himself the “bisexual of politics.” 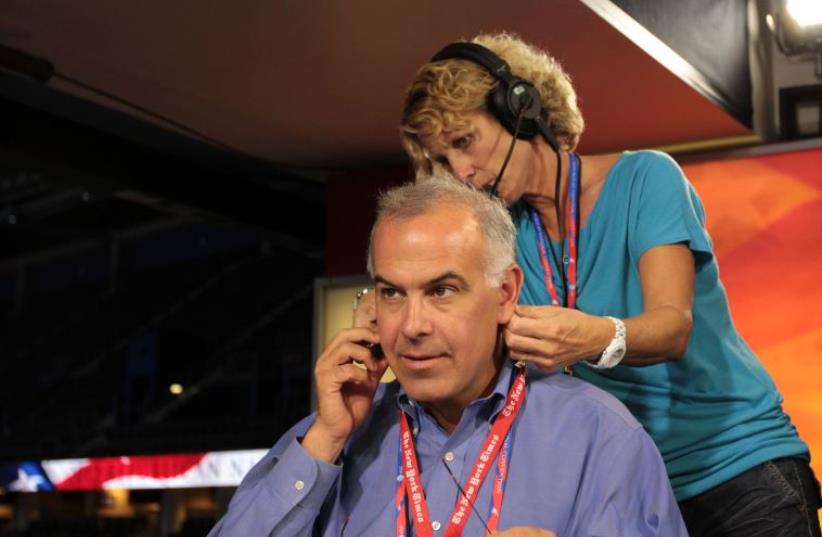 David Brooks and PBS staff at rehearsal for PBS Newshour in 2012
(photo credit: PBS NEWSHOUR/WIKIMEDIA COMMONS)
Advertisement
David Brooks is usually included in the long list of Jewish columnists now populating The New York Times op-ed pages, who include Paul Krugman, Bret Stephens, Thomas Friedman, Michelle Goldberg, Bari Weiss, Roger Cohen and David Leonhardt.Brooks himself has frequently surfaced his own Judaism in his writing, not only dedicating columns to intellectual Judaica but referencing Judaism in his more generalizable social critiques as well. He once wrote movingly of the contradiction of utilizing a World War II-surviving Torah at his son’s Washington, D.C. bar mitzvah, also, in early November, happily referencing “Jewish sage Martin Buber” to offer “a distraction from election anxiety.”In recent years, however, Brooks has been on a very public religious and intellectual journey. He has spoken about this reverence for two Catholic thinkers — Dorothy Day and St. Augustine — and cites Christian theology in essays that have become increasingly spiritual in focus. Speculating on Brooks’ religious leanings has become something of a journalistic parlor game — when the Columbia Journalism Review asked him about it in 2015, he responded “vaguely that he’s integrating with a new religious community.”In a June 6 conversation hosted by George Mason University’s Mercatus Center, Brooks defines his own religion as markedly divergent from the traditional Judaism he regularly references — using a rather pointed analogy to describe how he has come to be “more attached to the Christian story than ever.”“You’ve described yourself at times as religiously bisexual. What do you mean when you say that?” asked host Tyler Cowen.“I need my own bathrooms,” Brooks responded, eliciting crowd laughter. “I grew up in a Jewish household. And when you grow up in a Jewish household and Jewish family, kept kosher all those years, you read the Passover seder, and you feel deeply how stories enter you and the story of Judaism. And I feel so Jewish. A lot of my friends are Jewish. My jokes are Jewish. My style is Jewish. And so you feel that you’re just deeply and irrevocably embedded in that story.”“At the same time, I went to the school that probably had the biggest influence on me was called Grace Church School,” he added. “I was in the choir, and so I sat in chapel every day. Then I went to an Episcopal camp for 15 years, and then I read Reinhold Niebuhr, and then I fell in love with St. Augustine, and somehow you find that story settling into you. And so I feel more Jewish and more attached to the Christian story than ever. Both. So that’s why I’m bisexual.”Reinhold Niebuhr was regarded as one of the great Protestant theologians of the 20th century.  Brooks has used sexuality as a framing mechanism before, as in 2010, when, during an interview with Stephen Colbert, he called himself the “bisexual of politics.”Whether that settles the question is a matter of conjecture, although Brooks expands on the bisexual analogy in his George Mason interview to suggest that he is integrating the two faiths.“My bias, especially these days, is for infinite diversity and integration,” he tells Cowen. “In a weird way — and I really don’t understand this — all the fun in life comes from integration. That’s from integrating one group of people with a radically different group of people, and somehow it’s become uncool to be for integration.”