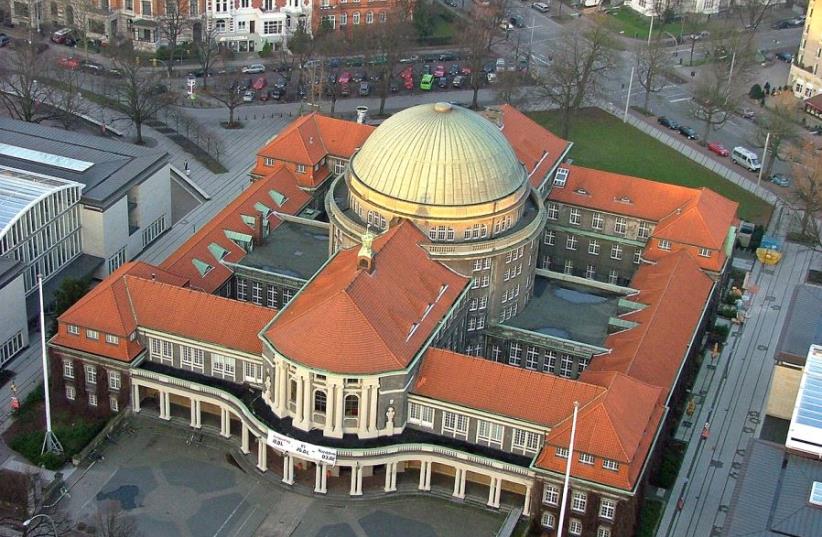 Main building of the University of Hamburg.
(photo credit: WIKIMEDIA COMMONS/MERLIN SENGER)
Advertisement
Israel’s Ambassador to Germany Ya’acov Hadas-Handelsman urged the University of Hamburg to dismiss South African Islamic theologian Farid Esack, who has been accused of antisemitism, promoting BDS and fund-raising for the PFLP terrorist group.The Die Welt newspaper reported on Tuesday that Hadas-Handelsman met with Green Party Hamburg Sen. Katharina Fegebank, who is responsible for the publicly-funded University of Hamburg, and expressed his concerns.A petition was launched by the group Christian Friends of Israel in North Germany calling on the Hamburg government to rescind Esack’s teaching assignment, the paper said, and the Christian Democratic Union Party in Hamburg is seeking to designate the BDS movement targeting Israel antisemitic.Esack, who is chairman of the South African BDS movement, welcomed his “comrade” plane hijacker Leila Khaled, of the Popular Front for the Liberation of Palestine, at a fund-raiser in 2015. The EU and the US have classified the PFLP as a terrorist organization.“This is a man [Farid Esack] who expressed antisemitic statements, and who is sympathetic to Holocaust denial. A person with such views has no place as an educator in a university, in particular not in Germany; due to both professional as well as moral and probably also legal reasons,” Israel’s embassy in Berlin told The Jerusalem Post last week. Carsten Ovens, scientific spokesman of the Christian Democratic Union party in Hamburg, told Die Welt: “Who today under the flag of the BDS movement calls to boycott Israeli goods and services speaks the same language in which people were called on not to buy from Jews.”Multiple Post press queries to university president Dieter Lenzen were not returned, and questions to the Green Party’s Fegebank on Tuesday went unanswered.When asked about the Ambassador’s call for Esack to be sacked, Fegebank told the Post, “Israel has an existential meaning for Jews in the world. We, as Germans, have a special devotion to the existence of Israel and a special responsibility toward Jews in Hamburg and in Germany. That also applies to our universities. I expect that everyone who teaches at the University of Hamburg is conscious of this special responsibility."  Fegebank, who is under fire for her failure to rope in antisemtism at the university, declined to comment if the PFLP is a terrorist organization and whether BDS is antisemitic. The Green Party in the state of Baden-Württemberg termed BDS antisemitic in 2016.A statement from Esack published on a BDS website in Germany said: “Neither I nor anyone on the staff or board of BDS SA has ever made any statement that could be reasonably interpreted as antisemitism. These accusations are part of a hundreds of million of dollars, Israeli government-funded operation.” Esack has compared Israel’s government to that of Nazi Germany on his Facebook page, and called former president Shimon Peres a “terrorist.”Hamburg’s Blue Mosque, which is supported by the Iranian regime, is currently hosting Esack as a speaker. The Iran-sponsored Islamic Center in Hamburg, which is part of the Blue Mosque compound, often hosts BDS events in Germany, and calls for the destruction of Israel at Tehran’s annual Al-Quds day at the end of Ramadan.  Chancellor Angela Merkel’s Christian Democratic Union Party ­classified the BDS movement as antisemitic at its 2016 party congress.
Esack has argued that “the idea of an Islamic State in Germany must be allowed to be represented.” Merel Neuheuser, a spokeswoman for the University of Hamburg, told the Post: “There is, at the present, no indication that Prof. Esack made any antisemitic remarks in the courses he taught at the university.” Follow-up queries to Neuheuser were not returned.