The report presented to the Israali cabinet also focuses on the demographics of Israel’s capital, concluding that the government should consider new measures to ensure a Jewish majority in Jerusalem. 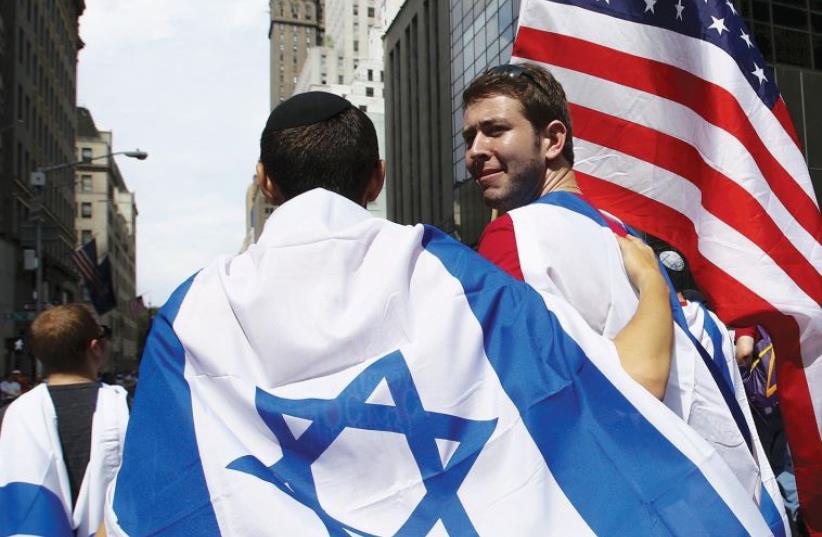 People take part in the 51st annual Israel parade in New York City last year
(photo credit: REUTERS)
Advertisement
NEW YORK – The liberal, Reform, Conservative and secular parts of the American Jewish community may become more distant from Israel as the country’s demography becomes more Orthodox and nationalistic, according to a report presented to the Cabinet on Sunday.Results from the 12th Annual Assessment of the Situation and Dynamics of the Jewish People, put together by The Jewish People Policy Institute, were offered by JPPI Co-Chairman Ambassador Dennis Ross and President Avinoam Bar-Yosef.Bar-Yosef explained that while there is significant support for Israel in North America, it isn’t compensating for “the young generation of liberal and secular American Jews [which] is increasingly critical of the Jewish state, and concerned that Israeli society is becoming more religious and more right wing.“Israel and the organized American Jewry should invest heavily in programs of inclusion that engage the ultra-Orthodox in the broader Jewish community and the general US society,” he stressed. “At the same time, follow-up initiatives for Birthright and Masa alumni must be drastically increased.”The report also focuses on the demographics of Jerusalem as Israel’s capital, concluding that the government should consider new measures to ensure a Jewish majority in the holy city.Among the measures JPPI suggests are creating jobs and more affordable housing opportunities – especially for younger graduates of the city’s academic institutions – in order to reduce native migration from the capital and retain more people in Jerusalem.“Related to this, the government should take any possible steps to raise and ensure the quality of life for non-Jewish citizens, especially in east Jerusalem,” the report added.“Non-Jewish Jerusalemites must be better integrated into the city’s social, economic, and cultural fabric.”The JPPI said it recommends “lowering tensions and strengthening the image of Jerusalem as a safe, developing, pleasant and special place to live.”In addition, the report also discusses the possibility of expanding municipal boundaries westward by annexing existing Jewish towns, or shrinking the current municipal boundaries and adding more residents to Jerusalem.“A policy that would strengthen the Jewish majority of Jerusalem while improving the life of the non-Jewish population could receive greater support from the Jewish Diaspora, and could even help strengthen its identification with Israel,” JPPI explained.The Institute’s study also found problems with the aliya process, specifically from France, where aliya is down 30 percent in 2016 from the previous year.“The main obstacles dissuading potential immigrants from France relate to employment, education for their children, and housing,” the report states.“While 40 percent of French Jews still consider making aliya, it is incumbent upon the Israeli government to successfully overcome deficiencies in aliya processing, and to ease the absorption process for new immigrants from France.”The 2015-2016 executive summary also examined geopolitical factors in Israel, Jewish pluralism in the country, foreign policy recommendations, the Arab-Christian community, as well as anti-Semitism in Europe.