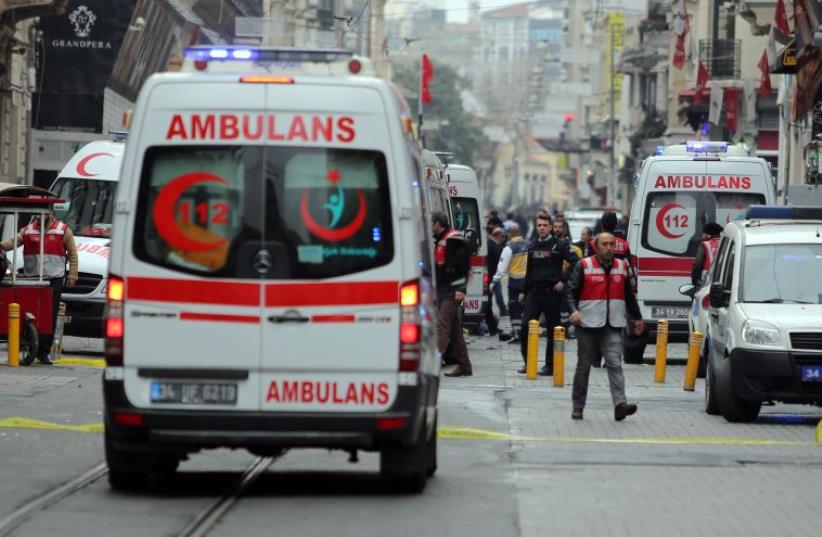 Istanbul, Turkey after suicide terrorist kills 5
(photo credit: REUTERS)
Advertisement
Islamic State terrorists had reportedly "advanced plans" to murder Jewish children in attacks aimed at educational and youth institutions in Turkey, according to Britain's Sky News on Monday. The report cited information allegedly obtained by intelligence officials from arrested ISIS operatives regarding "an imminent" attack. According to the Sky News report, six ISIS members arrested over the last week in the southern Turkish city of Gaziantep revealed the alleged plans by the extremist group to target Jewish children at kindergartens, schools and youth centers."In light of these circumstances, extraordinary security measures are being taken above and beyond the high alert level already in place by the Turkish police, as well as vigilance within the Jewish community," Sky News quoted an unidentified intelligence source as saying.The source added that Turkey was treating the information as "a more than credible threat," adding that it was "an active plot."The report noted a synagogue in Istanbul as the most likely target of an attack. The Turkish intelligence source underlined that: "Undercover and other covert counter-terror measures are being implemented around the clock."The report came 10 days after three Israelis and an Iranian were killed in a suicide bombing in central Istanbul. On Monday, Israel upgraded its travel advisory regarding Turkey, recommending that not only should Israelis not travel to the country, but that its citizens already there should leave immediately.