Nearly 10,000 Jews, mostly from France, made Aliyah in 2015 after instances of anti-Semitic attacks reached record numbers. 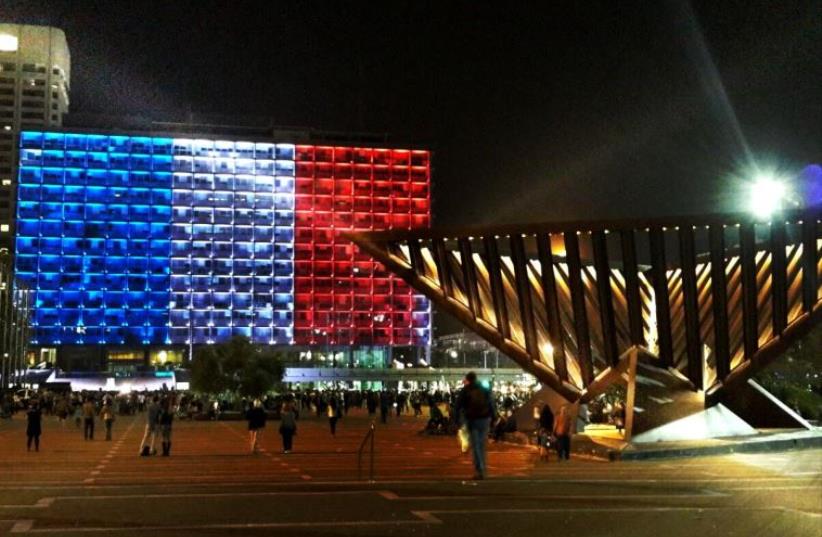 Rabin Square lit to honor of France after Paris terror attack in country's colors
(photo credit: Courtesy)
Advertisement
Immigration from Western Europe to Israel hit all-time highs in 2015 as the perception that Jews feel threatened in the continent continues to grow, according to The Daily Mail Thursday.Nearly 10,000 Jews, mostly from France, made aliya in 2015 after instances of anti-Semitic attacks reached record numbers.According to The Daily Mail, while instances of anti-Semitic attacks have occurred in Belgium, Denmark and other European countries, Jews in France feel  the most vulnerable to potential threats and dangers.  France's Jewish community is estimated to be around at least 500,000 and is the largest in Europe. That fear was increased earlier this week when a 15-year-old Turkish citizen of Kurdish origin, who said he acted in the name of the militant Islamist group Islamic State, attacked a Jewish teacher in the French city of Marseilles."He claimed to have acted in the name of Allah and the Islamic State, repeating several times to have done on behalf of Daesh (Islamic State)," the city's prosecutor, Brice Robin, told a news conference. The victim sustained minor injuries to his back and hand.The Daily Mail also noted that the increasing reports of attacks against Jews can be mostly attributed to assaults carried out by Muslim extremists.According to French officials, despite the fact that Jews only make up less than one percent of the population, 50 percent of of all hate crimes reported to police were filed by members of the Jewish community."That a record number of European Jews feel that Europe is no longer their home should alarm European leaders and serve as a wake-up call for all who are concerned about the future of Europe," Natan Sharansky, head of the Jewish Agency, was quoted as saying. "At the same time, the fact that Israel has become the number one destination for European Jews seeking to build a better future elsewhere is a tribute to the appeal of life in Israel and the values the Jewish state represents," Sharansky added.Reuters contributed to this report.