Around 50 staffers from both the Hillary Clinton and Bernie Sanders' campaigns sat together at a downtown Des Moines, Iowa venue organized by OneTable. 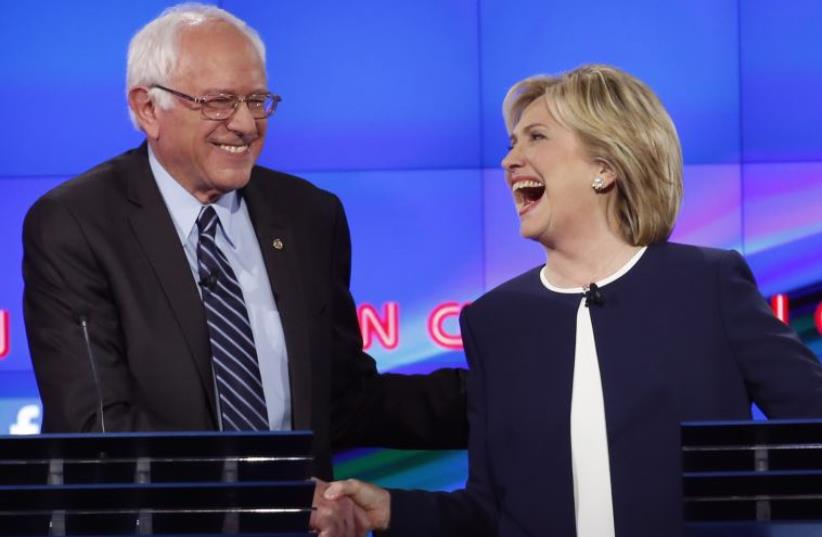 Bernie Sanders and Hillary Clinton
(photo credit: REUTERS)
Advertisement
Some 50 presidential campaign staffers and volunteers, journalists and local movers and shakers from this capital city’s Jewish community munched on house salads inside a stately ballroom at the downtown World Food Prize building last Friday night as Aliza Kline welcomed them to Shabbat dinner.Around the room, local prosecutors sat next to Planned Parenthood activists in Iowa to support Democratic candidate Hillary Clinton. Organizers for Clinton’s main challenger, Bernie Sanders, mingled with board members of the local federation.It was an indubitably Democratic gathering, although at least one Republican – a 19-year-old Vassar College sophomore named Pieter Block who has been volunteering for the Jeb Bush campaign over winter break – braved attendance.And yet there was a common denominator in the ballroom that Kline, the executive director of OneTable, a New York-based organization that helps Jews in their 20s and 30s organize Friday night meals, picked up on.“I’m in a room with people who give a shit,” Kline exclaimed, “and that makes me happy.”Founded in 2014 with support from a trio of Jewish nonprofits – the Steinhardt Foundation for Jewish Life, the Paul E. Singer Foundation, and the Charles and Lynn Schusterman Family Foundation – OneTable has facilitated 880 Shabbat dinners. Most have been in New York, but also in Chicago, Washington, D.C., San Francisco, and Boulder, Colorado.On the same day OneTable landed in Des Moines, dinners took place at the World Economic Forum in Davos, Switzerland, and in Park City, Utah, at the Sundance Film Festival.The initiative exhorts busy professionals to organize dinners not only to foster Jewish community but, more simply, for a much-needed change of pace – a manifesto that has particular resonance in Des Moines this time of year. With 10 days left before Iowans officially launch the presidential nomination process, statewide politicking, already clamorous in the lead-up to the Feb. 1 caucuses, only stands to intensify as campaigning draws to a close.In a cheeky nod to campaign fatigue, OneTable organizers left gold-and-black sleep masks, inscribed “Sssshhhhabbat,” at each place setting.Lisa Gerlach, 21, a scheduling and advance assistant for the Sanders campaign, acknowledged that her job is not conducive to drawn-out meals, let alone ones with three courses. So the dinner, she said afterward, was “definitely a good part of my week.”After Kline finished her address and guests finished their appetizers, they tucked into plates of maple-glazed salmon and sautéed asparagus followed by an assortment of desserts – rugelach, halvah and cookies – supplied by the city’s lone kosher restaurant, Maccabee’s.Next to the eye masks were cue cards with nonpolitical conversation starters (“French fries or tater tots?”), though discussions inevitably shifted to news of the day: Clinton’s planned address at the Jewish federation here, the merits of a national clean energy strategy, and so on.The dinner was a success, Gerlach said, because during an election, “you never really get to interact with people on the other side of the aisle in a very human way.” And moreover, it is rare that people from across the political spectrum have the opportunity to sit down for dinner in a non-hostile environment.On Friday, the discourse was notably civil, which is characteristic of Iowa in general, said Will Rogers, 46, the chairman of the Republican Party of Polk County and vice president of Tifereth Israel, the Conservative synagogue here.“We don’t attack one another and we don’t beat each other up,” Rogers said. “It’s kind of like a big family rooting for different teams during the Super Bowl.”Building off momentum from Friday’s dinner, OneTable’s hope is that similar affairs will pop up around the country over the course of election season. A dinner has been scheduled for Feb. 5 in Manchester, New Hampshire, four days before the primary there.“I’d love to see lots of primary Shabbats,” said Kline, 44. “It’s one more opportunity for people to get involved and to get together on a Friday night. So that feels very win-win for us.”With Sanders polling well beyond expectations in Iowa and New Hampshire, and reports that billionaire Michael Bloomberg, the former mayor of New York City, is mulling a late bid as an independent, the field of candidates could take on an unusually Jewish patina in the months ahead.Would OneTable try to involve the campaigns in future dinners? Probably not, said one of the organizers, Seth Cohen, a senior director at the Schusterman Family Foundation. Better to stay above the fray.“These dinners,” Cohen added, “are about the people in the politics, not the politics themselves – or the politicians.”