Rivlin greets 233 olim: You are no longer Jews in exile

Among group of North American immigrants, 75 will join army. 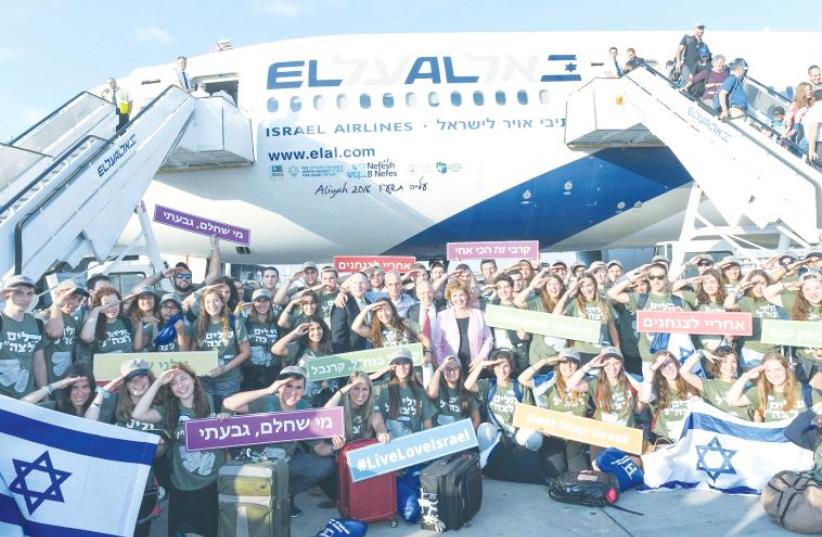 New immigrants pose for a photo with Immigration and Absorption Minister Sofa Landver (center, in pink blazer) yesterday upon arriving at Ben-Gurion Airport.
(photo credit: SHAHAR AZRAN)
Advertisement
President Reuven Rivlin lauded 233 North American olim (new immigrants) who arrived in Israel Wednesday, telling them they had fulfilled a 2,000-year-old dream. The group arrived on an El Al Boeing 777 chartered by Nefesh B’Nefesh in cooperation with the Immigrant Absorption Ministry, the Jewish Agency for Israel, Keren Kayemeth Le’Israel, JNF-USA and Tzofim-Garin Tzabar.“Just this week we marked Tisha Be’av, when we remember the destruction of the First and Second Temples in Jerusalem,” Rivlin said at a festive ceremony in honor of the olim, held at Ben-Gurion Airport as soon as they disembarked the plane. “The destruction of the Second Temple symbolizes the beginning of the long exile of the Jewish people. For nearly 2,000 years the Jewish people have known exile. For nearly 2,000 years the Jews dreamed to return to the land of our forefathers. For you, dear new olim, the exile that began then ends today. Now you are home. Welcome to Israel. Welcome to Zion. Welcome home.”Also participating in the ceremony were Minister-without-Portfolio Tzachi Hanegbi, Minister of Immigrant Absorption Sofa Landver, chairman of the Israel Scouts Eli Ben Yosef, and co-founders of Nefesh B’Nefesh Rabbi Yehoshua Fass and Tony Gelbart.“The State of Israel salutes the young people who chose to leave their comfortable lives in North America in order to make the greatest contribution to the country’s national security and its people,” said Landver.”I congratulate them and the other olim who make aliya as a result of the cooperation between the ministry and our partner in aliya, Nefesh B’Nefesh. I’m confident, and I promise, that the Immigration and Absorption Ministry will accompany these olim and take care of them throughout their entire integration process.”“Every single family and individual we bring to Israel who decides to make aliya is such a special thing for us as an organization, but when you see so many brave young men and women from North America sacrifice so much and voluntarily leave their families because they feel a yearning desire to serve in the IDF and defend Israel, that’s powerful,” said Rabbi Yehoshua Fass, founder and executive director of Nefesh B’Nefesh.The group of olim includes 75 young men and women who, fresh off the plane, will begin service in the IDF. They came to Israel as ‘lone soldiers,’ youngsters who left their families in the US and Canada to move to Israel and volunteer for the IDF. They will join the over 900 lone soldiers from the US, and the 3,000 lone soldiers from around the world who are currently serving in the IDF.
“I’ve always wanted to go into the army. I believe that if I want to live in Israel I should fight just like everyone else has to,” Matana Zwiren, who hopes to be a combat medic in the IDF, told The Jerusalem Post. “As a Jewish person, you just feel the connection to Israel,” she said. Zwiren, who hails from California, is joining her siblings who have already made the move, and the entire family will be reunited when her parents follow suit in a few months; but she says that regardless of whether or not her family is there, she feels Israel is her home.Zwiren was joined on the flight by her friend Nechama Friedman from New Jersey, and both have brothers already serving in the IDF. “You get a feeling in Israel that you don’t get anywhere else. The feeling that I got there... I just can’t explain. It’s a feeling you don’t get anywhere else in the world, a feeling of belonging,” Friedman said passionately.Eighteen-year-old Zach Amishav-Zlatin from Cleveland, Ohio, aspires to serve in Unit 217, an elite special operations force known as Duvdevan. He told the Post that he has always felt particularly connected to the West Bank, and feels that serving in Duvdevan – renowned for counter-terrorism operations – would be the right move for him. “I always visit Judea and Samaria. The dirt and the air there has a different feel and smell to it. Going to Duvdevan will be the best way for me to protect what I feel the most connected to,” he said.Of the 75 soon-to-be soldiers, over half are young women. The flight’s additional passengers include a diverse mix of people from 22 US states and one Canadian province, including 24 families, 78 children and 10 medical professionals. The ages of the immigrants range from 3.5 weeks to 85 years old.“I’m proud to be the eldest on the plane,” chuckled Gladys Schneck, from Hollywood, Florida. Schneck has dozens of children, grandchildren and great grandchildren living in Israel, and said all parties had agreed the time had come for her to join them. “I love Israel. I visit twice a year, and I felt very close to Israel all my life. In 1948 we stood at the corners in Brooklyn collecting money with flags. We would hold the [Israeli] flag up and sing songs,” she reminisced. Schneck is an artist and is headed to Jerusalem where she hopes to find a studio to work out of.Seated next to Schneck on the plane was Jane Kusel who decided to celebrate her 70th birthday with a one-way ticket to Israel. “It’s been a dream of mine from my very first trip to Israel,” she told the Post. “It has been at the top of my bucket list my whole life.My mind and body were living in the US but my heart and soul have lived in Israel.” Unlike Schneck, Kusel leaves all her children and grandchildren behind in the US, but is confident they will visit her in Israel. “This is my homeland,” she asserts.