Romania looks to Israel in dealing with its diaspora

Romania, in recent years, has made significant strides in facing its own wartime record and admitting guilt for past sins. 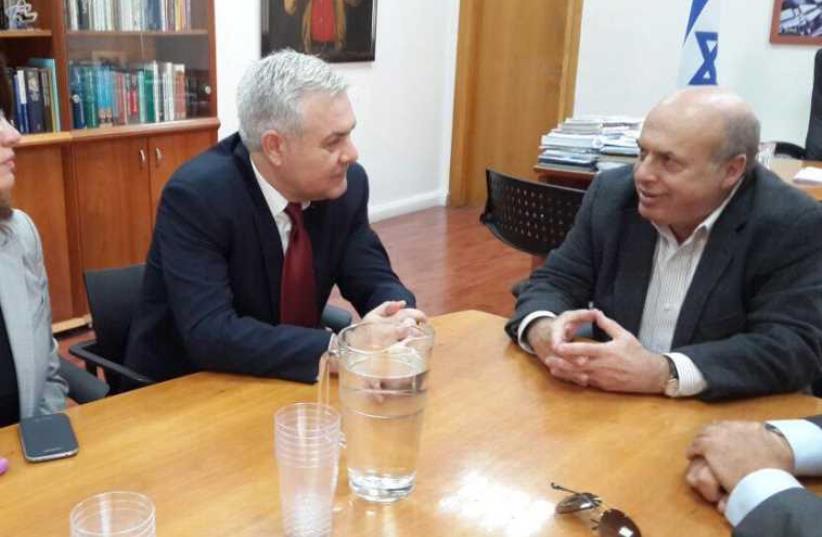 Jewish Agency Chairman Natan Sharansky and Angel Tîlvăr, Minister Delegate of Romanians Abroad
(photo credit: COURTESY NATAN SHARANSKY)
Advertisement
A top Romanian official has been in Israel for the past several days studying the country’s approach to dealing with Diaspora Jewish communities.Angel Tilvar, the country’s minister-delegate of Romanians abroad, arrived here Thursday for a series of meetings and consultations with both civil society groups and his Israeli counterparts, including Jewish Agency chairman Natan Sharansky and Immigrant Absorption Minister Sofa Landver as well as the Israel Council on Foreign Relations, a foreign policy forum which operates under the auspices of the World Jewish Congress.Bucharest estimates that there are some eight million people of Romanian descent living abroad, including a significant concentration in Israel.Interviewed by The Jerusalem Post at Jerusalem’s King David Hotel on Thursday, Tilvar admitted that one aim of his trip is reaching out to his countrymen, calling on them to “contribute to the preservation of their identity in terms of culture, language and traditions.”At least one Jewish leader who attended a speech by Tilvar expressed skepticism about this goal, however, stating that Romania’s checkered history when it comes to the Holocaust and related issues could prove a significant stumbling block.In recent years the country has made significant strides in facing its own wartime record and admitting guilt for past sins, creating a Holocaust education curriculum and beginning the process of paying restitutions for Jewish property.Progress has been slow, however, and with a spate of anti-Semitic statements by public figures, Romania has come under frequent criticism.Earlier this year a local anti-Semitism watchdog group condemned President Klaus Iohannis’ honoring of a man who praised fascists who murdered Jews during the Holocaust. In 2012, a politician who denied that Jews had suffered there during the Holocaust was appointed to a ministerial post despite protests, while one of the country’s representatives in the European Parliament denied the Holocaust on television.“Mistakes are still being made in statements and declarations today and must be criticized in a much stronger way than praises about the positive developments. The positive developments are normal, they must be done. But the errors, especially by politicians, must be stigmatized,” then President Traian Basescu said in 2014.Despite all of the tensions of the past, Tilvar said that he believes that he can help Israelis with roots in his country “be more connected with Romania” and that his work focuses on “what brings people together and on discovering common things that contribute to the preservation of identity.”He also said that he believes that his country can learn a lot from Israel and the Jews when it comes to how to maintain cohesion even when dispersed.Jewish solidarity despite centuries of exile could serve as a model for Romanians abroad, he said, adding that his government has initiated Romanian camps, magazines and cultural groups in countries where there are large expatriate communities.He noted the similarity between his country’s nascent efforts and the activities of the Jewish Agency for Israel, saying they “can be good examples for us.”A spokesman for the Jewish Agency said that Sharansky had agreed in principle to accept Tilvar’s invitation to visit Bucharest, adding that he had welcomed the Romanian government’s efforts to strengthen Romanian culture in Israel.“I told the minister that I welcome the opportunity to cooperate with his office and that I believe immigrants must preserve their original language and culture even after they arrive in Israel,” Sharansky wrote on his Facebook page.“The era of the ‘melting pot,’ which required immigrants to erase their prior identities in order to create a ‘new’ national identity, has passed,” Sharansky wrote. “Maintaining the immigrants’ cultural heritage serves only to enrich the country’s culture. Israel has benefited immensely from the vast variety of languages and cultures brought by its immigrants, including Romanian Jews.”