Draft law easily cleared upper house of parliament last week and will go to a final vote next Wednesday in the lower house, legislators say. 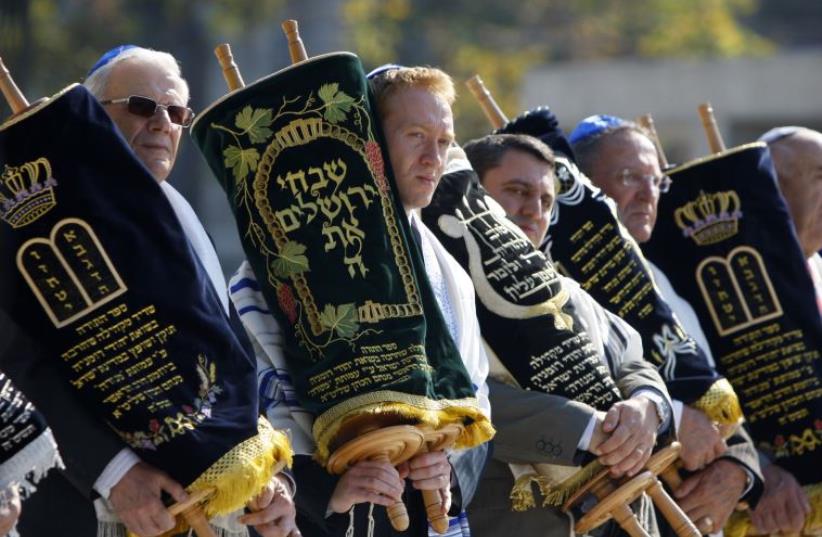 Jewish community members from Romania hold Torah scrolls during the inauguration ceremony for the Holocaust memorial in Bucharest October 8, 2009.
(photo credit: REUTERS)
Advertisement
BUCHAREST - Romania is to fast-track claims from Holocaust survivors under an amended law on property restitution which is expected to be passed by parliament next week, legislators said on Tuesday.Romania was an ally of Nazi Germany during World War Two until it changed sides in August 1944, and much of the property seized during the war was later nationalized under communist rule which followed.After the collapse of communist rule, Romania passed laws for returning property to the original owners in the 1990s but red tape prevented legislation from having any real effect.The country used to have a pre-war Jewish population of about 800,000 but now only up to 11,000 Jews live in Romania.An international commission, in a 2004 report, put the total number of Romanian and Ukrainian Jews who perished in territories under Romanian administration at 280,000 to 380,000 people.A draft law, published on parliament's website, said that in processing applications for the return of property priority would be given to "requests by people certified as Holocaust survivors by entities designated by the Romanian state or other European Union states ..."The draft easily cleared the upper house of parliament last week and will go to a final vote next Wednesday in the lower house, legislators said. Politicians expected it to win overwhelming support in the lower house.