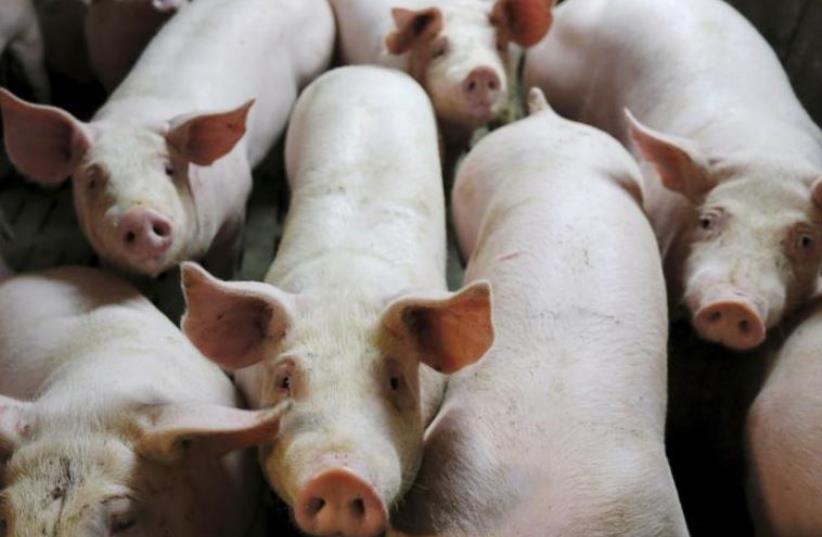 Pigs.
(photo credit: REUTERS)
Advertisement
BUCHAREST, - Israel reacted with "dismay and disappointment" on Thursday to a comment by Romanian Agriculture Minister Petre Daea, who compared the slaughter of sick pigs to the murder of Jews at the Auschwitz Nazi death camp.Daea's remark was made in a brief televised interview detailing veterinary health measures to halt the spread of African swine fever at a breeding farm in southern Romania, with 44,580 pigs being culled.He said: "The pigs (at the farm) are all incinerated ... it's extraordinary work, it's like Auschwitz."In a statement on Thursday Daea, a Social Democrat, apologized, saying: "I only wanted to present the particularly difficult situation facing pig breeders from African swine fever. In my soul there is a lot of pain, I wanted to describe the awful moments our farmers face."In its statement expressing dismay, the Israeli embassy in Bucharest said: "We hope ... that such an association was made by Minister Daea because of the lack of in-depth information on what the Holocaust and Auschwitz are, without the intention of dishonoring the memory of millions of victims."Several centrist opposition groupings in Romania called on the minister to resign.NAZI ALLYRomania has only in recent years started to come to terms with its role in the extermination of Jews, admitting for the first time in 2003 that it took part. Sensitivity towards the Holocaust and knowledge of it remain patchy.During World War Two, Jews from across Europe were sent to death camps built and operated by the Germans, including Auschwitz in Nazi-occupied Poland.Romania was an ally of Nazi Germany until August 1944 when it changed sides, and much of the Jewish property seized during the war was later nationalized by the communist dictatorship that followed.According to a 2004 report by a commission headed by Nobel laureate Elie Wiesel, between 280,000 and 380,000 Romanian and Ukrainian Jews were killed by civilian and military authorities in Romania and areas they controlled during the war.Romania had a pre-war Jewish population of about 800,000 but fewer than 11,000 Jews now live in the EU member state, which has a total population of around 20 million.