Many French Jews regard Marine Le Pen as dangerous, and the CRIF umbrella group of French Jewish communities has called her and the communist candidate Jean-Luc Melenchon 'candidates of hatred.' 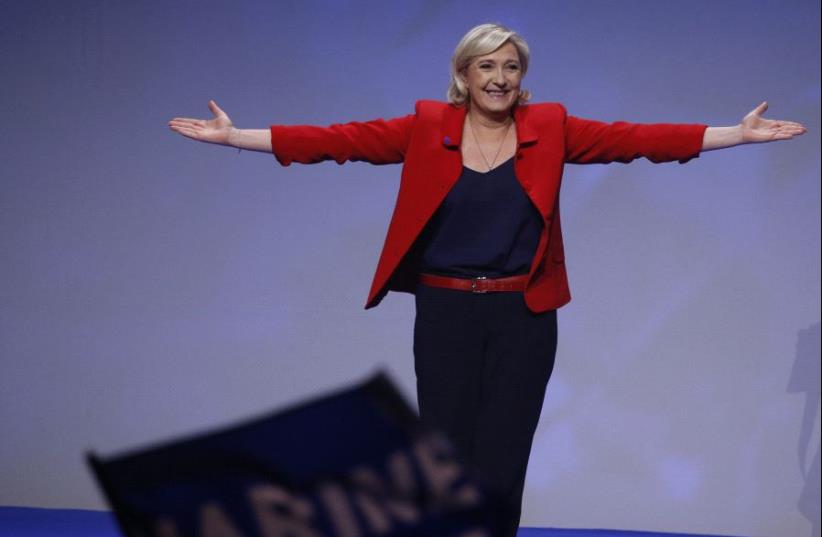 Marine Le Pen, French National Front (FN) political party leader and candidate for French 2017 presidential election, attends a campaign rally in Paris, France, April 17, 2017
(photo credit: REUTERS)
Advertisement
Russian Chief Rabbi Berel Lazar called on French Jews to leave their country if the far right politician Marine Le Pen is elected president next month.Lazar, a Chabad rabbi who was born in Italy and has lived in Russia for 25 years, made the remark on Friday while attending a conference on Jewish learning near Moscow organized by the Limmud FSU asssociation.“If Marine Le Pen is elected president of France, the Jews must leave,” Lazar said, according to a transcription of his address at the conference provided by Limmud FSU. Lazar was a keynote speaker of the event, which drew 2,500 participants — a record attendance since Limmud FSU began holding conferences across the former Soviet Union.Polls ahead of Sunday’s first round of the presidential elections suggested the centrist independent candidate Emmanuel Macron is in a tight race for the lead with Le Pen, leader of the National Front party and the daughter of its founder Jean-Marie Le Pen, who has multiple convictions for Holocaust denial and incitement of racial hatred against Jews. Macron and Le Pen each have about 22 percent of the vote in an Ifop poll from April 19.Le Pen recently called for banning the wearing of the kippah in public and for making it illegal for French nationals to also have an Israeli passport — steps she said were necessary because of the principle of equality in order to facilitate similar limitations on Muslims.Le Pen has said radical Islam is a “threat on French culture” and has called on Jews to make certain “sacrifices” in order to fight jihadism. She has softened the rhetoric of her party after taking over from her father in 2011 and has kicked out of the party dozens of members over antisemitic rhetoric — including her father.National Front’s best showing in a presidential elections was in 2002, when Jean-Marie Le Pen made it to the second round and received 18 percent of the vote in it, losing to Jacques Chirac. In France, the winner of the first round of voting runs against the second-place candidate in the second and final round.Many French Jews regard Marine Le Pen as dangerous, and the CRIF umbrella group of French Jewish communities has called her and the far-left communist candidate Jean-Luc Melenchon “candidates of hatred.” CRIF President Francis Kalifat on Friday said that Le Pen and Melenchon’s growing popularity is “a real danger to our country’s democracy.”
Nervousness over 2017 French presidential elections as investors take stock of recent polls showing a tightening race between candidates Le Pen, Macron and Melenchon (REUTERS)
Melenchon has risen from fifth place in the polls in February with 9 percent of the vote to third with 19 percent. Francois Fillon, the center-right candidate of the party of former president Nicolas Sarkozy, also has 19 percent. In 2014, during a speech about Gaza, Melenchon condemned French Jews who support Israel, adding: “France is the opposite of aggressive minorities that lecture to the rest of the country.”Lazar during his address at Limmud FSU said that, “The situation there [in France] is very worrying. Not only because of immigrants, but also because the general population is heading toward radicalization. The best example of this is the rise of extreme-right parties.”Lazar’s analysis of the situation in Western Europe echoes previous statements by Kremlin officials, seeking to discredit European governments critical of the policies of Russian President Vladimir Putin, including the outlawing of literature on homosexuality, the abuse of judiciary for the elimination of political rivals and the introduction of severe limitations of free speech. Under Putin, Lazar’s Federation of Jewish Communities of Russia has become the largest Jewish organization in Russia.Lazar praised Putin during his address Friday, saying: “Putin was the first president to publicly speak out against antisemitism and did the most for the Jews in Russia. There is no institutional antisemitism in Russia.”