The subsidiaries at the heart of the debate issued a joint statement in which they asserted that they “condemn anti-Semitism in all its forms.” 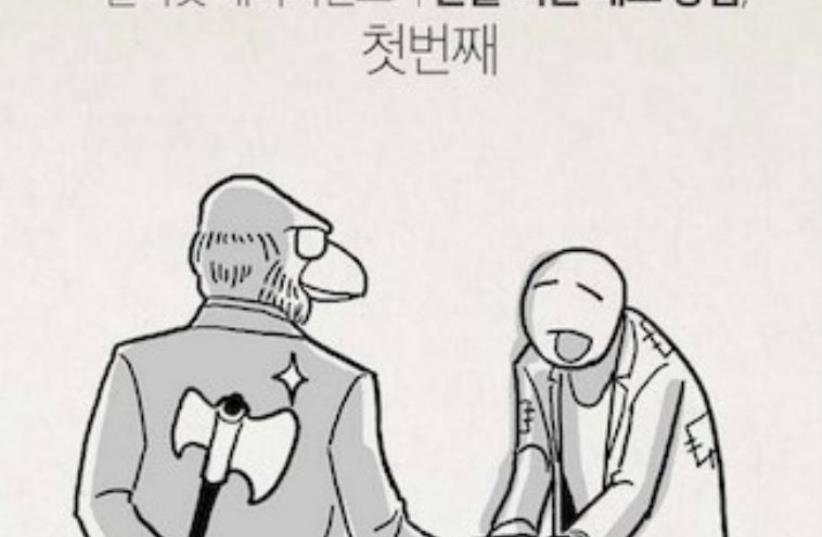 Samsung cartoon
(photo credit: screenshot)
Advertisement
Samsung pulled two cartoons lambasting a critic of a merger between two of its subsidiaries from its website Wednesday, amid allegations of corporate anti-Semitism.The cartoons, according to screenshots and translations provided by observer.com, portrayed Paul Singer, the Jewish head of the Elliot Associates hedge fund and a leading opponent of the merger, as a vulture taking money from a ragged man while hiding an ax behind his back.In another, he is illustrated standing by as a soldier in the Congo aims an assault rifle at a small child.Pro-Samsung media outlets in South Korea came under fire from Jewish groups after utilizing anti-Semitism to belittle Singer.“Elliott is led by a Jew, Paul E.Singer, and ISS [an advisory firm that analyzed the merger] is an affiliate of Morgan Stanley Capital International (MSCI), whose key shareholders are Jewish. According to a source in the finance industry, Jews have a robust network demonstrating influence in a number of domains,” the South Korean financial publication MoneyToday said last week.Meanwhile, Mediapen, another local publication, asserted that “Jews are known to wield enormous power on Wall Street and in global financial circles” and that it is a “well-known fact that the US government is swayed by Jewish capital.” Jewish money, it reported, “has long been known to be ruthless and merciless.”Responding to a demand by the Simon Wiesenthal Center, the subsidiaries at the heart of the debate issued a joint statement in which they asserted that they “condemn anti-Semitism in all its forms.”After the publication of the cartoons, however, Simon Wiesenthal Center associate dean Rabbi Abraham Cooper said that he believes “the blatant Jew-hatred cartoons invoking genocidal stereotypes is outrageous and makes a mockery of earlier statement by Samsung.”“The belated removal of these Nazi-like caricatures is not enough. The Simon Wiesenthal Center does not consider this matter closed. At this point Samsung is not believable. I represent a constituency of 400,000 member families who are demanding to know why your company facilitated such behavior.”