It was revealed that Bernie Sanders had visited Israel in 1963 as a guest of the leftist Zionist Hashomer Hatzair movement, and stayed on the affiliated Kibbitz Sha’ar ha'Amakim. 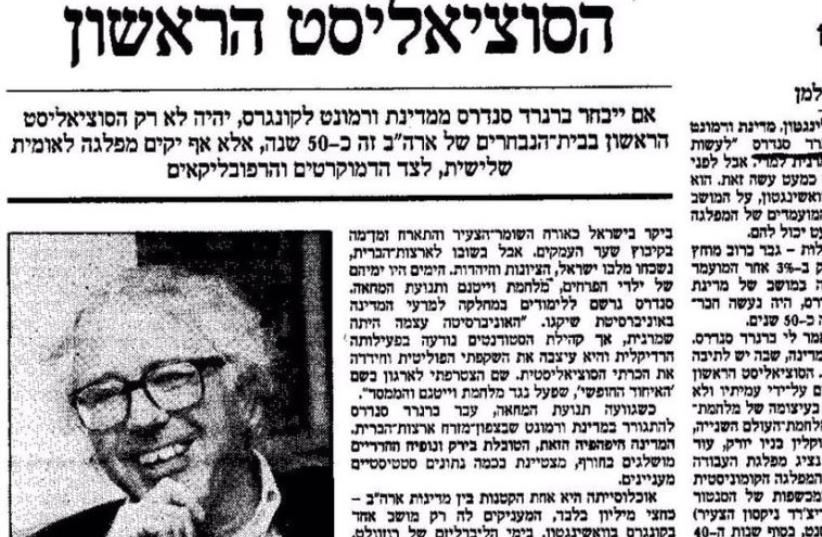 After months of fruitless searches for the kibbutz on which candidate for the Democratic nomination for president Bernie Sanders volunteered, Jerusalem Post Intelligence and Security columnist Yossi Melman revealed the answer Thursday night: Kibbutz Sha’ar ha'Amakim.

Sanders referred to volunteering on a kibbutz in 1963 or 1964, depending on the interview, but has refused to answer the question as to which one many times over the course of his presidential campaign.

Journalists in Israel and the US trolled the archives of the kibbutz movement, but could not find the answer.

Melman tweeted that in an interview with Sanders in 1990, the then-candidate for Congress said he had volunteered at Kibbutz Sha’ar ha'Amakim, a kibbutz near Migdal Haemek, through the leftist youth movement Hashomer Hatzair.

In the article, headlined “The First Socialist,” Sanders told Melman that in the Brooklyn community in which he grew up, “the Holocaust and Israel were always important.”

Sanders, who was critical of the Reagan and first Bush administrations' policies in Central America, also said: “As a Jew, I am embarrassed by Israeli involvement on the continent [of South America]. It is embarrassing that Israel sells weapons to the worst of the Central and South American regimes. Why do you need to be the American government’s mercenaries?”

The candidate also said that he “would like to see the US put more pressure on Israel to compromise on the Palestinian matter.”

Kibbutz Sha’ar ha'Amakim was founded in 1929 in Romania, and united with pioneers from Yugoslavia, before finding a permanent site in Israel in 1935. Most of its current income is from the Chromagen solar water heater factory, but it still has farming activities, including a cowshed, flour mill and avocado grove.