Administration officials at the school said that she could be formally charged under New Jersey’s Anti-Bullying Bill of Rights Act, which could lead to suspension or expulsion. 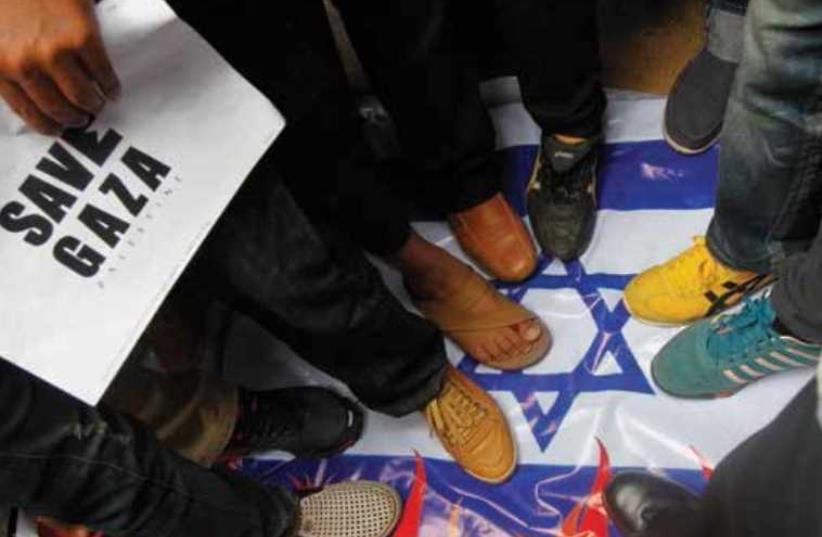 Demonstrators step on the national flag during an anti-Israel protest in front of the Israeli Embassy in Bangkok last year.
(photo credit: Wikimedia Commons)
Advertisement
A New Jersey high school student — reportedly a Jewish-Israeli — is facing possible bullying charges stemming from Twitter posts that school administrators called anti-Israel.An assistant principal at Fair Lawn High told Bethany Koval, 16, on Wednesday that she could be formally charged under New Jersey’s Anti-Bullying Bill of Rights Act, which could lead to suspension or expulsion from school, the Gothamist reported. The matter has been referred to the superintendent of schools.In tweets about the 2014 Gaza war and the Israeli-Palestinian situation, Koval called Israel a “terrorist force” and said “Hamas is not extreme.” Another post on the social media site expressed happiness that a pro-Israel classmate had unfollowed her. Koval did not identify the student, but told a friend she would provide the name in a private message.In a tweet, Koval said she does not believe that to be bullying.“Her name was never mentioned. I never degraded her. They use ‘bullying’ as a guise to cover their pro-Israel, pro-censorship agenda,” she wrote.Koval surreptitiously recorded parts of a meeting she had with a school administrator over the bullying accusations in which she called her tweets about Israel “controversial,” but not “problematic.”“Well, that’s your interpretation,” the administrator responded. “There’s a state law that might interpret it differently.”Koval, who goes by the nickname “Benny,” was identified by The New York Times as a Jewish-Israeli. The Gothamist, which first reported the controversy, said she grew up in Fair Lawn, a New York City suburb, and has family in Israel.The teen has received a great deal of support on Twitter, where she has nearly 6,000 followers, many of whom now using the hashtag #IStandWithBenny. The international hacking group Anonymous also has backed Koval.