My father’s sudden death sent me on a journey across Germany, the Deep South and my own backyard here in Israel. 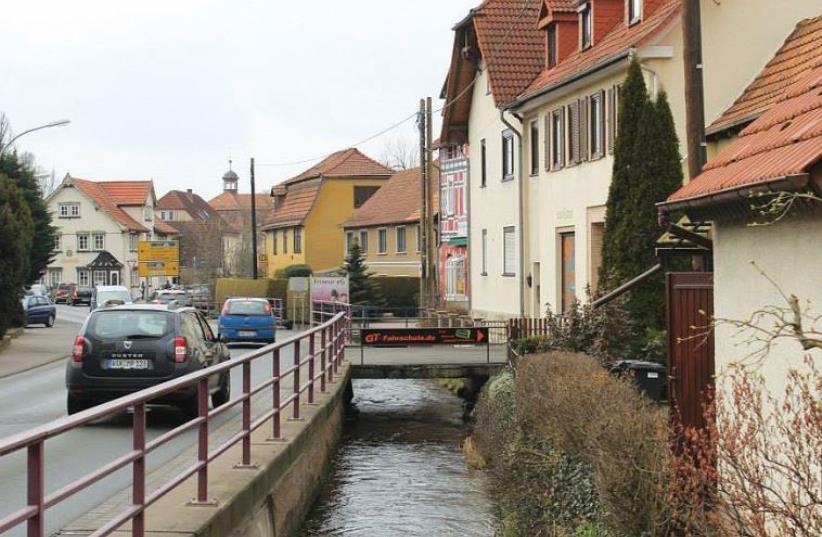 The German village of Barchfeld, to which the writer traveled to unlock the mysteries surrounding the history of his ancestors
(photo credit: Courtesy)
Advertisement
I’ve never been one to believe in ghosts, but the scene was enough to make you wonder. A light rain at midnight in a remote German village, a church bell ringing overhead, and my footsteps echoing off the pavement below the church tower were enough to put a chill in my bones.It was seven months after my father’s death, and for the first and only time since, I found myself speaking to him, asking him to guide me to the remains of the synagogue that once stood in the village before it was torched on Kristallnacht. The next day, on a tour of the village, my wife and I were taken to the actual spot. It was several blocks away, nowhere near where I’d walked the night before.Much of Europe can seem like a giant cemetery to a Jew raised overseas, especially one on a roots trip (a “Holocaust trip,” if you will) to the towns and cities their ancestors called home before the inferno all but erased their like from the continent.In my case though, after months of obsessive genealogy research in the year of mourning for my father, I’d come to Germany already chasing ghosts.The journey started a year earlier in southeast Texas, in the small towns of my father’s childhood. His father, Lee Hartman Sr., was a small-town doctor in the postwar years in places like Newton, a sawmill town in the piney woods of east Texas, and Vidor, which to this day, to many Texans, is less a town than a synonym for the Ku Klux Klan. Mainly though, for several years they called the relatively big city of Beaumont home, and in the now dismal downtown, Dr. Hartman had a practice of his own.Last March, on one of the last days my father and I spent together, we visited his childhood home, designed in the 1950s by a Jewish architect from Houston named Howard Barnstone. The house – which was a bit ahead of its time – is in a bucolic, green neighborhood, surrounded by soaring trees that scrape the sky, the impression being that the people who used to live here had made it.The trip was my idea, and in hindsight it was prophetic – coming just a few months before my father would die of a stroke, suddenly and without warning at his home in Austin, where my brother and I grew up. In the year before his death I became fascinated by his story, from his short stint in the Marine Corps to his time in a Jewish fraternity at the University of Texas in the early ’60s and his childhood in Beaumont and beyond. 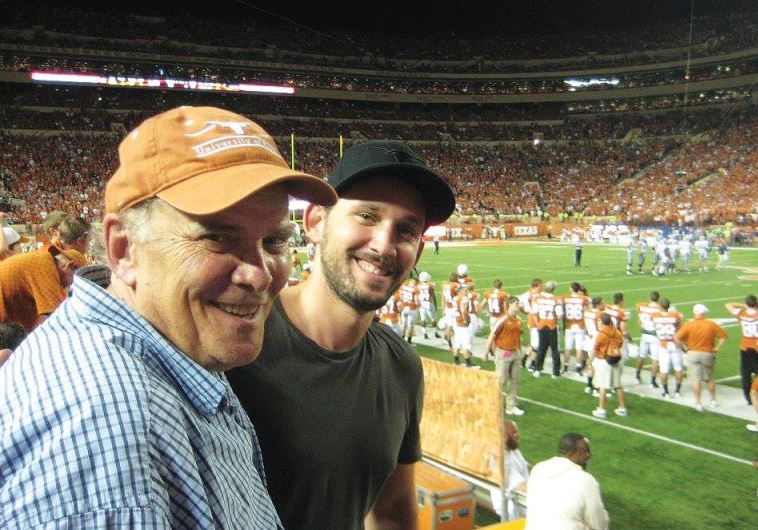 ‘HE WAS always the person I knew best, the one most like myself,’ the writer (right) says of his late father, Lee Hartman (left). (Noah Abdenour)
Through his story I also started to try to piece together as much as I could about the grandfather I never met.One of a pair of identical twins born in Greenville, Mississippi, in 1916, Lee spent much of his childhood in a Jewish orphanage, The Jewish Children’s Home, in New Orleans. Later, he lived in the city’s French Quarter and studied medicine at Louisiana State University, where he and his brother were in the marching band and were part of the honor guard at the funeral of governor Huey “Kingfish” Long, after his assassination in 1935.After serving as a captain and flight surgeon in the army air corps in the China Burma Theater in WWII, Lee raised his family in southeast Texas, until his untimely death in 1964. Along the way he spent three years as a physician and psychiatrist for the Texas Department of Corrections, including at Huntsville Prison, site of the state’s infamous death row.Every mile marker in that story reads like a novel to a grandson who never met him, each a mystery to unravel in the years to come. Tracing these two men has been, I realize now, part of a desire to get to know my father as a young man, years before he became a parent. Knowing his past seems a key to unlocking something about my brother and me. He was always the person I knew best, the one most like myself, the image I saw in almost every thread of my character.Only since his passing has it become clear how many blind spots are left to fill.That’s how my wife and I found ourselves in Germany in March. A month before, I’d happened upon an entry on a genealogy site on my great-grandfather Marcellus Hartman, a Greenville attorney who died at age 39 in 1917, after a short bout with illness. It was posted by someone I’d never heard of, and listed his siblings, his parents and grandparents, and the small town they came from, Barchfeld, in central Germany, where like many of the area Jews, they worked as cattle brokers.Previously, the story I’d heard was that a few Hartman brothers, including one named Leo, had immigrated to the Deep South sometime around the Civil War, and had worked as cattle brokers in the Mississippi Delta. I’d heard my grandfather was named after Leo (“Lee” in Mississippi), but nothing more, at least not that I could recall. 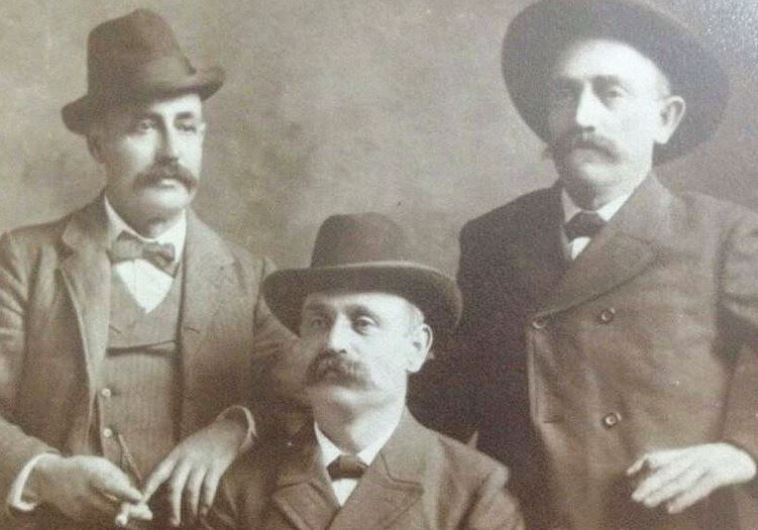 A photo of the Hartman brothers, Levi, Moses and Gustav, who resided in the Deep South in the late 19th century.
The entry was filled out by a fourth cousin of mine in Washington, DC, and other entries on the Hartmans and their extended family were filled out by a third cousin and her son, both from Ohio. All traced their roots back to Greenville, and before that, Barchfeld and the surrounding area.From there a wealth of information flowed in – obituaries from turn-of-the-century Mississippi, photos and wedding announcements, anecdotes on a whole constellation of Hartmans and their relatives. I also found newspaper ads for my great-great-grandfather’s dry goods store in downtown Greenville and mentions of my ancestors in the local newspaper’s society page. These pictures illustrate people who were the pillars of their community; immigrant Jews who found success in the deep south.Some of the most surprising – and tragic – revelations were found closer to home, though, in Israel. On a number of occasions I’d checked the Yad Vashem database, but searching “Germany + Hartman” brought up a sea of names, with nothing to go on. Adding “Barchfeld,” though, narrowed the results to four names – Levi Hartmann, his wife Mathilde (Levor) Hartmann, and their children Bruno and Gertrude. The children were murdered in Auschwitz in 1942 and 1944, and their parents were murdered on March 13, 1943, shortly after arriving in Sobibor, according to Yad Vashem. A third child, Lissa Hartmann, managed to escape, making her way from Amsterdam to Norway and finally to Sweden, on the last day the border was open. She lived the rest of her life outside Stockholm, where she married a local Jewish man and helped run a school for mentally disabled children until her death.The family fled Barchfeld for Amsterdam in 1936, after the Nuremberg laws were passed. They took refuge with the Levor family, and on a Dutch Jewish community historical site I found a picture of the extended family posing together at a function held sometime in the late ’30s, when they were living on borrowed time.Levi Hartmann was the son of Samuel Hartmann, the uncle of my great-grandfather Marcellus. Samuel was the only one of the four Hartmann brothers to stay behind in Europe, and a generation later his son and grandchildren would share the fate of millions of Jews. I couldn’t help but think how at the same time my grandfather was studying with his twin brother at LSU, they had a cousin back in the Old Country whom they probably didn’t know about, who was running for his life with his wife and children.The Yad Vashem entries on the Hartmanns included another name I’d never heard of before, Martha Lev-Zion (Levor), the woman who filled out the entries, and apparently, a relative by marriage.Dr. Lev-Zion was founder and president of the Negev branch of the Israel Genealogical Society and wrote and lectured about the Jews of Franconia and Thüringen. Before her death in February 2014, after a long bout with illness, she wrote a book, Taking Tamar, about her daughter with Down’s syndrome, whom she adopted after she was abandoned by her birth parents at the hospital.The research that she and my distant cousins in the US put in set the wheels in motion for us to visit Barchfeld, where months later I found myself standing below a church tower at midnight in a cold drizzle in March.The next morning, local historian Klaus Schmidt and a town priest named Michael Stahl took my wife and me on a tour, showing us the former site of the Jewish day school and the mikve, and the synagogue torched on Kristallnacht.Schmidt also pointed out two different houses where Hartmanns lived until the war. One of these included stock pens for cattle, another sign that long before the Hartmans made the Deep South and Texas home, they were already country folk.In Stahl’s office just before the tour, Schmidt pulled out a file he’d compiled with a sticker slapped on it reading “Hartmann family.” Inside he’d collected a bevy of documents on the erstwhile Jewish community, which reached a peak of around 240 members in the late 19th century, dwindling to 63 by the time Hitler came to power in 1933. At least 20 natives of the village were murdered in the Holocaust, including the four Hartmanns, according to the file.In Schmidt’s folder, he also had a copy of a birth registry for my great-great-grandfather, the “Leo” I’d heard of in bits and pieces. Right there, in old cursive handwritten German, it said “Lovie Hartmann” (“Levi”), which became “Lee” after he arrived in the US in the second half of the 19th century, sometime after the Civil War.Just like that, the true origin of my father and grandfather’s namesake – and my middle name – came to light, in a faroff German village.A few months later, one of the distant cousins in the States sent me a scan of a portrait shot of the Hartman boys – Levi and his brothers Moses and Gustav. It was taken around the turn of the century, either in Little Rock, Arkansas, or Farmerville, Louisiana, where Moses opened and ran a local hotel. They cut an impressive figure – each holding a cigar and wearing suits and black hats with big bushy mustaches that no Hartman I know today could ever pull off.Putting a face to the name was an accomplishment, but really only a single step in piecing together the story of my family, my father, and myself.Though I wish I’d done this when my father was alive, so I could share it with him, the genealogy research has instilled in me a feeling of connection to a wider history and stories bigger than my own, those of the Holocaust, the Deep South, and of Europe.It also drives home that we were never really lost, and that for as long as I was wondering where my own roots lay, and long before that, there were other branches in our family tree looking for us as well.We just had to find them.